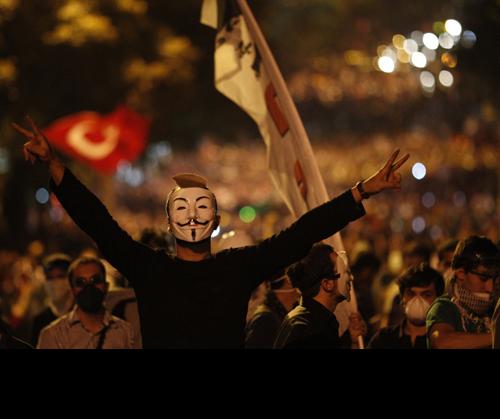 Prime Minister Tayyip Erdogan, who has repeatedly dismissed the demonstrators as “riff-raff”, was expected to meet protest leaders today though one core group said it had not been invited and would not attend anyway.

Police fired volleys of tear gas canisters into the centre of a crowd of thousands on Taksim Square without warning at dusk yesterday. The crowd included people in office clothes gathered after work and families with children, as well as youths in masks who had fought skirmishes throughout the day.

Clouds of choking tear gas sent them scattering into side streets. Staff in surrounding hotels raised shutters just enough to allow people to crawl inside for shelter, as water cannon swept across the square targeting stone-throwing youths.

The fierce crackdown on the initial protests against the planned redevelopment of Gezi Park, a leafy corner of Taksim, drew international condemnation and calls for restraint. The latest police move came a day after Erdogan agreed to meet protest leaders involved in the initial demonstrations.

“There’s no room for dialogue when there’s ongoing violence,” said Mucella Yapici of the Taksim Solidarity Platform, a core group behind the Gezi Park campaign.

Chanting gangs of hard-core demonstrators taunted police in the narrow lanes leading down to the Bosphorus waterway late into the night, drawing more tear gas and water cannon spray. Municipal workers used bulldozers to remove the remains of vandalised vehicles and clear the square above.

Police also fired water cannon to disperse protesters in the centre of the capital, Ankara.

Erdogan earlier called on protesters to stay out of Taksim, where a heavy-handed police crackdown on a rally against development of Gezi Park triggered an unprecedented wave of protest in cities across Turkey almost two weeks ago.

Gezi Park has been turned into a ramshackle settlement of tents by leftists, environmentalists, liberals, students and professionals who see the development plan as symptomatic of an overbearing government.

The authorities have said legitimate protesters in the park will be allowed to stay, for now, and they remained camped out.

The protests, during which demonstrators used fireworks and petrol bombs, have posed a stark challenge to Erdogan’s authority and divided the country. Erdogan, who denies accusations of authoritarian behaviour, said he would not yield.

“They say the prime minister is rough. So what was going to happen here? Were we going to kneel down in front of these (people)?” Erdogan said as action to clear the square began.

“If you call this roughness, I’m sorry, but this Tayyip Erdogan won’t change,” he told a meeting of his AK party’s parliamentary group.

Western powers have voiced concern about the troubles in an important NATO ally bordering Syria, Iraq and Iran. The United States has in the past held up Erdogan’s Turkey as an Islamic democracy that could be emulated elsewhere in the Middle East.

“We continue to follow events in Turkey with concern, and our interest remains supporting freedom of expression and assembly, including the right to peaceful protest,” White House spokesman Caitlin Hayden said in a statement in Washington.

The victor in three consecutive elections, Erdogan says the protests are engineered by vandals, terrorist elements and unnamed foreign forces. His critics, who say conservative religious elements have won out over centrists in the AK Party, accuse him of inflaming the crisis with unyielding talk.

The unrest has knocked investor confidence in a country that has boomed under Erdogan. The lira, already suffering from wider market turmoil, fell on Tuesday to its weakest level against its dollar/euro basket since October 2011.

The cost of insuring Turkish debt against default rose to its highest in 10 months, although it remained far from crisis levels.

Turkey’s Medical Association said that as of late Monday, 4,947 people had sought treatment in hospitals and voluntary infirmaries for injuries, ranging from cuts and burns to breathing difficulties from tear gas inhalation, since the unrest began more than 10 days ago. Three people have died.


Greeks shocked as broadcaster is shut to save money
Reuters / Phuket Gazette
PHUKET: Greece announced the closure of its state broadcaster out of the blue yesterday, one of the most drastic measures yet in its struggle to shore up its bankrupt state finances and meet the terms of an international bailout.

The decision to take ERT off the air at midnight and pay off some 2,600 staff before relaunching it in a slimmed-down form set off a firestorm of protests from trade unions and even junior partners in the ruling coalition. Some of the channels appeared to shut down even before the deadline.

“At a time when the Greek people are enduring sacrifices, there is no room for delay, hesitation or tolerance for sacred cows,” spokesman Simos Kedikoglou said in what was almost certainly ERT’s last televised government statement.

The three domestic television channels, along with regional, national and external radio stations, cost Greece 300 million euros ($400 million) a year, and Kedikoglou said it had become a “typical case of … incredible waste”.

Thousands gathered outside ERT’s headquarters after the announcement, vowing to fight the decision, and riot police blocked the entrance to a studio in central Athens where protesters had unfolded a banner reading “Down with the junta, ERT won’t close!”.

“Today is Tuesday, June 11, and it is a difficult day,” anchorwoman Elli Stai told viewers from the studio as crowds of workers outside chanted and clapped.

“We will broadcast what appears to be our last news bulletin with the composure, consistency and professionalism that we are used to.”

Private TV stations took their live shows off air for six hours in a display of solidarity, replacing them with re-runs and adverts. None ran the traditional 8 p.m. news bulletin.

The announcement followed an embarrassing failure on Monday to find a buyer for the gas firm DEPA as part of a broad sell-off of state assets, leaving Greece short of the cash to meet its bailout targets.

The closure of ERT immediately opened cracks in Prime Minister Antonis Samaras’s fragile three-party coalition, whose two junior partners protested that they had not been consulted.

At the protest rally, opposition leader Alexis Tsipras called the closure “a coup, not only against ERT workers but against the Greek people”, and accused the government of the “historic responsibility of gagging state TV”.

The decision was made by ministerial decree, meaning that it could be implemented without reference to parliament.

“Journalism is being persecuted. We won’