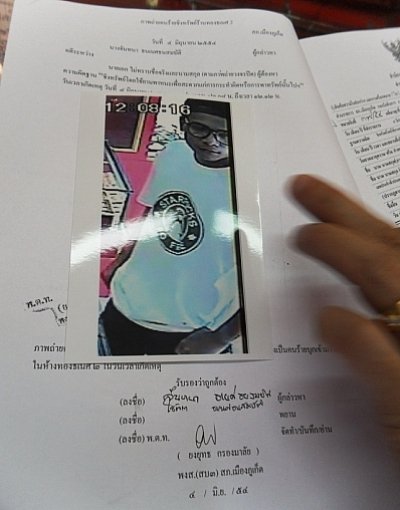 PHUKET: Police have issued an arrest warrant for the man who held up a Phuket Town gold shop on Saturday.

“We have issued the arrest warrant for a ‘Mr Ake’. We don’t know his full name, but we know he is from Surat Thani. He is a big, dark-skinned man who wore a wig and used a fake gun, as shown in the CCTV images,” said Pol Col Chote Chitchai.

Police have already questioned the Patong-based owner of a borrowed motorbike used by the suspect to carry out the heist, he said.

“I have known him for three or four months. He rented one of my apartments, staying several days at a time. He claimed he was from the same village as me and that we attended the same school.

“He seemed to be a good man, even though I did not recognize him as a former classmate. He borrowed my motorbike many times, but I had no part in this heist,” the motorbike owner said.

Chantana Thanetthanasombut, the owner of the shop, is offering a 100,000-baht reward for information leading to the capture of Mr Ake, plus 30 per cent of the value of the gold stolen for any recovered items.

Col Chote late yesterday morning went to the shop, where the value of the stolen items is now estimated at over five million baht.

“I pressed the alarm many times while I was being robbed, but no officers came,” said Mrs Chantana.

However, when police officers tested the shop alarm, they discovered it was not working. This explained why no police officers appeared within a minute’s time, as they are supposed to under an agreement between the police and the local gold sellers association, police said.

They say that Mr Ake, who entered the shop with a replica gun, managed to wrest control of a real firearm from a 13-year-old daughter of Mrs Chantana.

Phuket Police duty officer Yongyut Krongmalai told the Gazette the search for the elusive Mr Ake is ongoing, both in Phuket and other provinces.

He asked the Gazette to publish the man’s image to inform the public of his appearance and aid in his capture.

The intensity of the manhunt is reflected in the fact that top-ranking Phuket City Police police officers are encouraging the public to contact them by mobile phone with any leads:

Phuket Police to lead the way to free, fair election