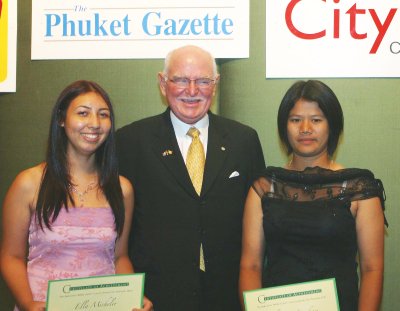 BANGKOK: It was a moment for Phuket to be proud of: the two winners of the Southern Thailand round of the Second Junior Impac Dublin Literary Awards last night scooped all-comers in the overall competition for Thailand.

Thipratri Saenkam, 18, and Ella Micheler, 17, won 10,000 baht apiece for their entries in the Southern Thailand round, topping a field of 69 entrants from Phuket, Surat Thani and Pattani.

They then went to the finals in Bangkok, where they were chosen as winners out of 300 entries in the all-Thailand competition, Thipratri winning the section for Thais and Ella the section for non-Thais.

As part of their prize, the two girls will go, each with one parent, to Dublin this summer to attend the senior Impac Dublin Literary Awards in Ireland, the world’s richest literary prize.

The Thailand competition is organized by The Nation and Nation Junior, and is sponsored by productivity consultancy IMPAC and  Enterprise Ireland, a business-promotion agency of the government of Ireland.

The southern regional competition was organized and co-sponsored by the Phuket Gazette.