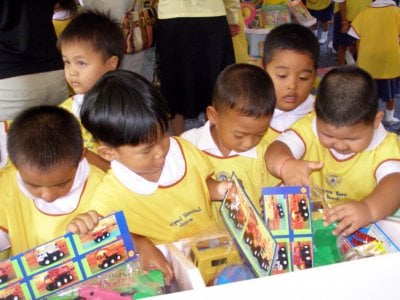 Community Foundations (CFs) are a powerful force for doing good in society. They are also financial powerhouses. For example, Rotary has total worldwide assets – that is, investments from which Rotary clubs draw an income – of around US$700 million. In contrast, the Tulsa Community Foundation alone has assets of US$3.l7 billion, and the top 10 in the US have assets totaling around US$18 billion.

Yet in Thailand, few have heard of CFs or know how they work. CFs are different from conventional charities. In the conventional model, donors give to the charity whose agenda is closest to their heart, and the members of the charity then apply the funds to that agenda.

There are several charities in Phuket that already do very valuable work, such as helping stray animals, assisting with children’s education, housing orphans and underprivileged children and preserving culture.

Their contribution can never be overvalued. But there are huge gaps, huge needs, that are not addressed by charities, or by national or local government. It is these needs that the PCF was set up to address.

The foundation has a sweeping remit. Its stated mission is “To help maintain or improve the quality of life in Phuket for everyone – regardless of their origins, their beliefs, or their social or financial status – with particular emphasis on poverty alleviation; preserving the environment; education (of both children and adults); promoting art and culture; preserving the island’s architectural and historical heritage; improving public safety; and boosting public health.”

How on earth is the PCF going to do all of this? It isn’t. To use an analogy, the PCF is to charitable or community work what a bank is to industry. Banks make nothing.

They do not own factories, hire workers or turn steel into cars. What they do instead is support these activities through funding, through expert advice and by providing transparency.

In much the same way, the PCF, of which the Phuket Gazette is a founding sponsor, was established to support community organizations and charities (including those already mentioned) by helping to source funds, by providing expert advice or volunteers and by giving social projects the transparency that is otherwise often lacking.

The PCF does, in fact, have a couple of projects of its own. Although we believe these are valuable to society in general, they are also designed to act as a “shop window”, to demonstrate what can happen when a variety of elements of society can be drawn together to achieve an aim.

The first of these projects is the Motorcycle Back Light Project. Anyone who has driven on a dark road at night will know the heart-stopping experience of having a motorcycle with no rear light appear right in front. Rear-light bulbs cost just 20 baht, yet a straw poll suggests that as many as one in four of all motorbikes on Phuket don’t have a working rear light.

The PCF has drawn a variety of people and organizations together to address this problem. Motorcycle dealers donated bulbs, the Kusondharm Foundation lent a tent and chairs are borrowed from a nearby temple. Students from the Vocational College give up a couple of days of their free time to change bulbs. The PCF designed and made posters, which bike owners can read while their bulbs are changed, explaining why a rear light can save the rider’s life. The total cost to the PCF of the first session, during which we made 150 motorbikes safer, was about 7,000 baht.

Our other current project is to establish toy libraries in different parts of the island. Toys are an important element in developing children’s imaginations and, when with other children, their social skills. Yet many families on the island simply cannot afford them. One toy library, from which children will be able to borrow toys to take home, has already opened at Wat Thepnimit on Chao Fa East Road and another at Hongyok Bamrung School in Mai Khao. We have earmarked two other schools for action.

Again, the libraries are a demonstration of what can be achieved when different people are brought together. At Hongyok Bamrung School, Bt200,000 was given by the Phuket Direct Fund Association of Zurich to pay for toys and furniture to store them in. Bamrung Sampaorat, Chairman of the Islamic Committee of Phuket, paid from his own pocket for the painting of the room, which was done in a single morning by sailors and marines from the USS Boxer (organized by Brad Kenny of the Patong Rotary). Additional toys came from private donors, including primary students at the British International School. The library will be run by the school itself. At the opening, the Phuket International Hospital gave free health check-ups, and put on a puppet show.

As can be seen, the PCF is capable of pulling together a variety of good-hearted people to complete a project. But there must be thousands of ideas for projects out there. We can offer help and advice, and ensure financial transparency, but we can’t manage them all.

This is why we are now compiling a database of people who have ideas and are willing to put in the time to make them happen; potential donors (in cash or kind); experts willing to give free advice; and volunteers who want to spend time doing something worthwhile.

If you fit into any of these categories, we would very much like to hear from you. You can contact me by email at alasdair@phuketcharity.org or, if you prefer to write in Thai, email Roongprakai Sang-in at manager@phuketcharity.org. The PCF website – which has just undergone a thorough revamp – is at www.phuketcharity.org.