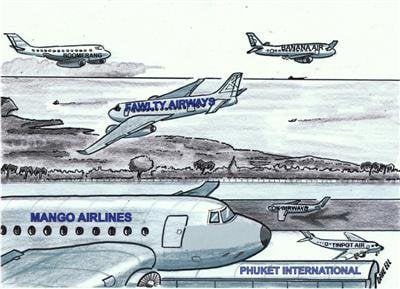 PHUKET CITY: Developments in the aviation industry bode well for Phuket and its tourism industry going into the high season.

The most important of these is Thai AirAsia’s decision to establish Phuket as a second ‘aviation hub’ for its growing operations in Southeast Asia.

Since entering the Phuket market in 2003, Thai AirAsia has been a consistent performer in an industry that has undergone some turbulent times: a tsunami, a major air crash disaster, a crippling takeover by anti-government protesters, health scares and a global economic downturn.

Through down cycles, most carriers serving the Phuket market have been quick to suspend flights as soon as load factors dip.

The problem is that most of them are slow to respond when demand increases. This leaves the island with a lack of direct flights from Bangkok, hardly a desirable situation for an island with almost 40,000 hotel rooms to keep full all year round.

Bangkok Airways new ‘codesharing’ agreement with Germany’s second largest carrier Berlin Air will certainly help better tap into that country’s lucrative market. And while Thai Airways recently announced more flights on the BKK-HKT route, AirAsia is going one better with its plan to permanently station as many as five aircraft in Phuket as part of its ‘second hub’ plan.

This will allow Phuket residents the chance to fly direct to destinations such as Jakarta, Bali, Ho Chi Minh City and Chiang Mai on scheduled flights for the first time.

This is the best news the local tourism industry has enjoyed for some time.

Another positive development is the entry of the newly established Happy Air, which launched direct services to Haad Yai and Langkawi over the weekend. This will be welcome news to visa runners, students, businesspeople and the considerable number of people from Songkhla and points further south who live and work in Phuket.

Some mystery remains about who is behind the fledgling carrier or how it was named, but the twice daily ‘reverse triangle route’ from Phuket-Haad Yai-Langkawi-Phuket seems a likely winner.

A number of airlines have tried and failed to operate the Haad Yai route using large jet aircraft, only to find load factors too low.

Unfortunately, a tarnished safety record seems to have forced the island’s namesake carrier out of the market for scheduled flights altogether.

At last report it was renting its aircraft out on charter flights for Muslim pilgrims going on the Hajj.

Let’s hope Happy Air focuses on offering consistent quality and safety, helping develop Phuket as a true air hub – and giving us all a reason to smile.