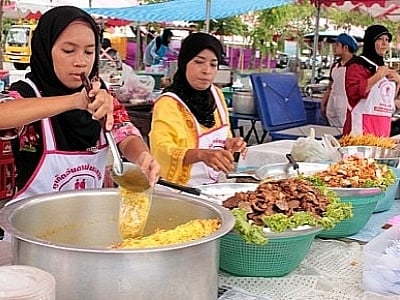 PHUKET: Representatives from 70 halal organizations from 35 countries have been invited to join the ‘Phuket Halal International Forum and Andaman Muslim Expo 2011’, which gets underway at Phuket Graceland Resort and Spa in Patong on June 22.

The two-day international forum will focus on halal certification in each respective country, seeking to reach consensus on a standard in order to meet Islamic law.

Following the forum will be a two-day Muslim food and culture fest at Saphan Hin in Phuket Town.

He explained that potential tourists in Islamic countries were still not sure whether or not halal food was available in Phuket.

“They already know that Phuket is a beautiful and interesting island to visit. However, they are concerned about the food, which must be prepared according to Islamic law.

“This event will help promote halal food in Phuket among Muslim tourists from Asian and Middle Eastern countries. They do not have to worry about the food they will eat,” he added.

“Islamic people there were impressed and happy to learn that halal food in Phuket can be of the same standard as in Islamic countries,” he explained.

The OrBorJor and the Phuket Islamic Committee are working together to have more restaurants in Phuket certified as halal food vendors, Mr Paiboon added.

“The restaurant operators have to be trained first, but this certification is not for Islamic food restaurants only. Any kitchen in hospitals and hotels with halal menu items can apply for certification,” he explained.

The expo will also feature various Islamic ceremonies and rites, including a traditional Muslim wedding.

Other traditional ceremonies to be showcased include Aqiqah, a rite for Muslim newborns, normally conducted by family members seven days after a child is born.

The rite includes offering a sacrifice (traditionally an animal), and shaving and naming of the newborn.

There will be a traditional Sunat ceremony, during which young Muslim boys are circumcised, and displays explaining the stages involved in completing the Hajj, the pilgrimage to Mecca Muslims are asked to complete at least once in their life.

The forum and the expo, organized by CICOT in conjunction with the Phuket OrBorJor and the Shiekhul Islam Office, has been provided a budget of five million baht.