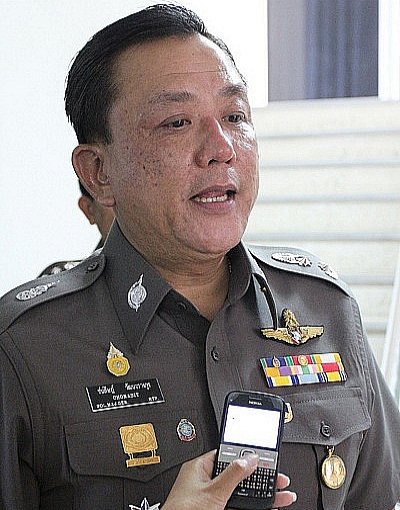 PHUKET: Phuket will get a new provincial police commander as part of a nationwide reshuffle of top provincial-level officers.

Phuket Provincial Police Deputy Commander Chalit Kaewyarat today confirmed to the Phuket Gazette the results of the reshuffle announced at a meeting of the National Police Committee at Royal Police Headquarters in Bangkok yesterday.

“Phuket Provincial Police Commander Chonasit Wattanavrangkul has been transferred to take up the position of Commissioner of Inspection Division 9, Office of the Inspector General, in Bangkok.

Col Chalit, a Phuket native who has also served many years as a police officer in Phuket, said he would be transferred to serve as Phang Nga Provincial Police commander.

“The order will be effective from October 1,” Col Chalit said.

As expected by many, yesterday’s gathering in Bangkok did not end without controversy. Pol Gen Achirawit Suphanphesat, who earlier criticized politicians for interfering in the reshuffle process and compromising its meritocratic component, walked out on the proceedings.

“Before the meeting started, I presented a document that included some proposed promotions that I deemed inappropriate in terms of qualifications and principles,” he said, adding that other promotions were raised in the course of the meeting with no real chance for deliberation by the board.

Gen Achirawit said he explained his concerns to the board, but that the chairman [Deputy PM Chalerm] simply carried on without even considering his opinion.

“When I realized they would not consider our view, I walked out without first informing any fellow commissioners,” he said.

“Also, Police Region 8 Deputy Commander Col Daoloy Muandej, who has done outstanding work in drug suppression and has lots of experience, did not get promoted. Instead, Phuket Provincial Police Deputy Commander Chalit Kaewyarat, who has less experience and produced less outstanding results, got promoted to the post of Phang Nga Provincial Police Commander,” Gen Achirawit said.

Deputy PM Chalerm insisted after the meeting that the entire process was both “fair and transparent”.

“No money was involved with the reshuffle list. I understand that there are people who are upset with the result; it always happens when there is a meeting like this. The result can’t please everyone, but we have considered this matter carefully,” he said.

Thai National Police chief Preophan Dhamapong said, “I am not worried about the reshuffle list. I just thought that police officers who walked out of the meeting should have listened to the explanation before walking out so that they might better understand why we made the decisions we did,” he said.