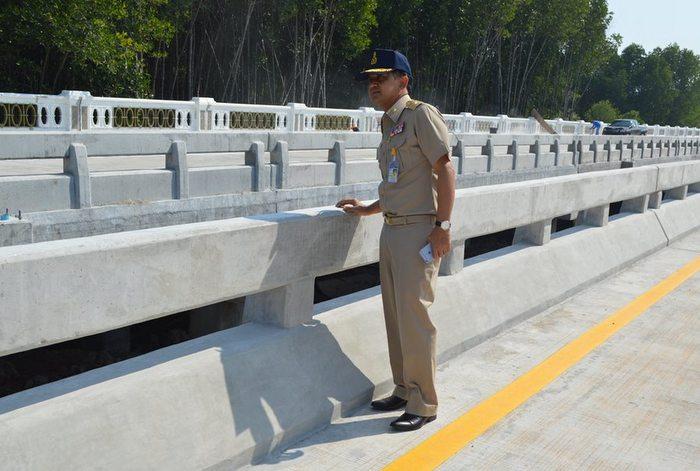 PHUKET: After suffering months of daily 200,000-baht fines, the construction company of the highly anticipated Klong Koh Pee Flyover will have the project ready to present to the public for the grand opening on April 6.

“Locals have been waiting a long time for this project, which has been named ‘Thep Srisin Bridge’,” explained Phuket Governor Chamroen Tipayapongtada during an inspection yesterday. “The project was supposed to have been finished in September last year. Since that date, the contractor has faced a daily fine.”

The project connects Sakdidet Road Soi 7 directly to Saphan Hin, and is expected to be open for use midway through this month.

Work on the project began 19 years ago, but was held up after the Ministry of Natural Resources and Environment ruled that the final stretch could not be built through mangroves in the area, which drains an area of low-lying land, much of it the legacy of sediments deposited there during decades of tin mining.

The project was approved by Cabinet under the Yingluck Administration in 2012 (story here). The approval follows a series of special legal amendments, enacted specifically for Phuket and the Klong Koh Pee project during the administration of the Abhisit government, that allow projects in mangrove preserves with ‘exceptional public benefits’ to go forward, but only with Cabinet approval.

Ground was broken for the flyover project in 2013 (story here).

The plans for the flyover were modified after Cabinet approved a 200-million-baht budget for the mangrove flyover. Estimated costs for the project had dropped by 30 million baht since Cabinet’s approval and the length of the overall project was extended from 600 meters to 700 meters. Many other small adjustments were made to the construction plan: the elevated section of road has been reduced from three and a half meters to three meters; and the length of the elevated section of road has gone from 510 meters to 495 meters.

A Decade Ago: Jet-ski and guide woes