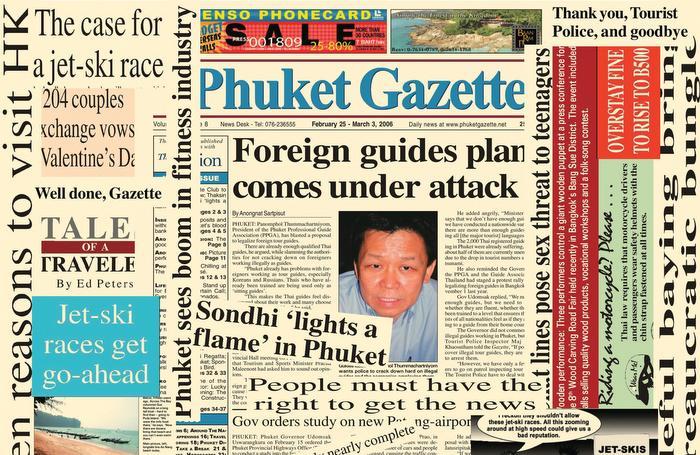 PHUKET: There is a reason that old-dog expats are jaded and sound like MP3 players with less than half a dozen songs playing on shuffle. That’s because, like it or not, they’ve seen the mangling and crushing of that beautiful idea us newbies to the island think will be the catalyst for ‘real’ change.

When it comes to what have become entrenched, decade-long fights, the February 25-March 3 issue of the Phuket Gazette was running hot with both jet-skis and illegal tour guides.

Page one was dominated by attacks on a plan put forward by then-Governor Udomsak Uswar-angkuru to legalize foreign guides (guiding is one of many professions reserved for Thais). The president of the Phuket Professional Guide Association blasted the proposal.

Phuket already has problems with foreigners working as tour guides, especially Koreans and Russians. Thais who have already been trained are being used only as ‘sitting guides’, the president said.

“We have conducted a nationwide survey and there are more than enough guides covering all [the major tourist] languages.

Replace the word Korean with Chinese and the Gazette could easily have run the comment in the news this week, following several tour guides being scooped up by the Central Investigation Bureau (CIB) last Sunday.

Also hauled in as part of the central government’s ‘Peace for the People’ raid were 28 illegal jet-ski operators, representing perhaps one of the largest legal actions taken against the well-protected industry. They are so well entrenched in the sands of Phuket, in fact, that they are still here.

As noted in the Gazette editorial 10 years ago, the governor had pledged to phase out all jet-skis by March 1, 2011. He was clearly a fan of the sound deadlines make as they fly by, as well as the wacky, offbeat, satirical humor of Douglas Adams. Can you imagine Phuket with no jet-skis? It has the same statistical likelihood of a potted plant and whale suddenly appearing in space and falling to Earth.

And though in this particular editorial, as opposed to countless others that stretched out nearly ten years ahead and behind this particular piece, this one was pro-jet-skis. Let us clarify: it was in favor of professional jet-ski events on the island, not jet-ski cowboys renting out dangerous machines to untrained, unlicenced and unconcerned tourists.

Since hosting the first round of the 2006 Jet Ski Thailand Championship, the island has played host to a number of other professional jet-ski events, including the Gazette sponsored Southeast Asia Games.

As the island continues to promote sport tourism, there is little doubt that the fitness and health industry is also growing at exponential speeds.

The opening of two major fitness centers – a total investment of about 86 million baht – was marked in the Gazette as the island ‘experiencing a boom’ in the fitness industry. Now, a quick drive through Nai Harn or a walk down Soi Ta-ied makes it clear that a couple of new gyms are hardly a drop in the bucket.

That, of course, is neglecting to point out the voluminous training facilities at Thanyapura Phuket, which in 2015 was looking to top up an already staggering investment with an additional 300 million baht to further strengthen its status as the ‘Sports Hub of Asia’.

Thankfully, no jet-ski operators have razed the government about not allowing them access to those popular swimming lanes. Unfortunately, that is not the case for many of Phuket’s beautiful beaches.