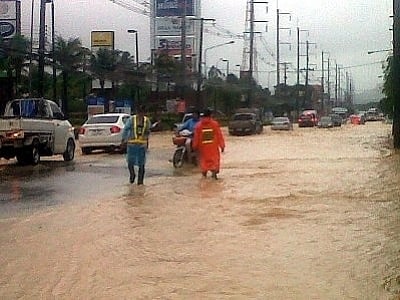 PHUKET: Downpours this morning have caused havoc across Phuket, with road closures and major traffic delays reported across the island – and another landslide in Patong.

The Department of Disaster Mitigation and Prevention office at Patong Municipality this morning told the Gazette they received a report of a landslide on Soi Kuan Yang, located off Patong Hill road between Wat Patong and the hilltop Chinese shrine.

Officers are inspecting the damage now, but initial reports indicate only minor damage.

The areas around the Patong Municipality offices and the intersection in front of Patong Hospital junction are flooded with knee-high waters.

Phang Muang Sai Kor Road is reported to be inundated to the same depth from Patong Hospital to to the back of the Jungceylon shopping complex.

Rat U-Thit 200 Pi Road is closed for four kilometers, including the entrances to Soi Sawatdirak and Soi Sai Nam Yen. Floodwaters have reached about knee-high there in the area.

Patong DDPM officers have used seven firetrucks to block the sections of Rat U-Thit 200 Pi Road and are ferrying people across flood areas with a small boat.

About two kilometers of Thaweewong Road, which runs along the Patong beachfront, is flooded to a depth of about one foot. The affected area starts near the La Flora Patong Resort and extends to Loma Park.

Reports of traffic chaos caused by flooded roads and homes in Chalong, in the south of Phuket, are also pouring in.

“At the turn-off at the Big Buddha intersection on Chao Fa West Road traffic is at a complete standstill. A number of small sois [streets] on either side of Chao Fa West Road are flooded, with many residents taking to the streets in disbelief,” reported Fraser Morton.

“Water was as deep as three feet at Tiger Muay Thai earlier,” he added.

In front of Villa Market Hompro, a stretch of about 100 meters of the road is completely inaccessible. Police are on the scene, where scores of motorbikes are stalling and breaking down.

“Only a few cars are managing to get through. Anyone thinking of traveling from the south of the island to Phuket Town – unless it is absolutely essential – should not do so,” he said.

The Phuket Gazette invites readers to post information about flooding in their communities in the readers forum below and to send relevant photos to: editor@phuketgazette.net