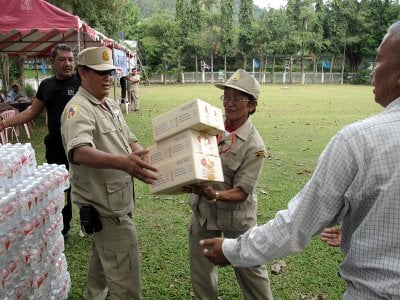 PHUKET: The Phuket Provincial Office yesterday dispatched more than 100,000 baht in donated funds and other aid to help the tens of thousands of people affected by flooding in Thailand’s central and northeastern regions.

Thus far, at least 17 people have been killed from the deluge in central and northeast Thailand, with tens of thousands displaced and in need of life-saving essentials.

Phuket Governor Tri Augkaradacha chaired the send-off, during which the substantial donations from various segments of Phuket society were announced.

The Phuket aid was destined for Lopburi, one of the worst-hit provinces.

The donation center, located at Provincial Hall, was coordinated by the Phuket Provincial Office and Red Cross Phuket, where donations have been pouring in over the past week.

Many other items were brought to the donation center. These included bags of rice, bottles of water, instant noodles, toilet paper, canned food, blankets, pillows, clothes, and even pairs of slippers.

Donations have been made by both the private and government sectors, including the Kusoldharm Foundation, the Phuket Red Cross chapter, Cherng Talay Tambon Administration Organization, Tourist Police, Thalang District, Muang District and the Phuket civil defense volunteer organization.

The event also marked the closure of the center. The Department of Disaster Prevention and Mitigation (DDPM) will now assume the responsibility of accepting additional donations at its offices on Damrong Road in Phuket Town. The DDPM is now asking for cash donations only, if possible.