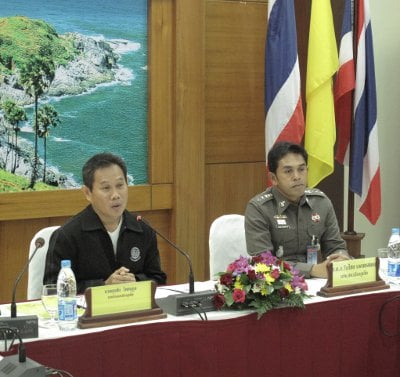 PHUKET: Mandatory drug testing is part of an initiative by Phuket City Police aimed at ridding the district’s hotels and guesthouses of illegal drugs.

Representatives of 75 accommodation establishments met yesterday for a briefing on the initiative, dubbed the “White Hotel” project.

The scheme is the brainchild of Phuket City Police Deputy Superintendent Chaiwat Auykham, who wants to create a “sustainable” approach to drug suppression in the Phuket City Police District, which covers Koh Kaew, Wichit and Rassada as well as Phuket Town.

“We will provide information to hotel staff about illegal drug use and help them find ways to stay away from narcotics,” he explained.

But the effort won’t stop there. Staff will also be trained in ways to spot behavior that could be indicative of drug dealing or drug use, as well as how to report suspicious individuals to the authorities.

At the heart of the agreement will be a memorandum of understanding (MoU).

To be signed by both police and hotel operators, the document will be a written commitment by hotels confirming that they will adopt a “Triple No!” strategy in dealing with illegal narcotics use on their premises: No drug makers, no drug traders, and no drug takers.

The MoU will also be signed by operators of serviced apartments and other types of temporary lodging facilities.

Establishments that sign up for the project will be subject to follow-up evaluation to ensure they are living up to their commitments, Lt Col Chaiwat said.

The initiative would serve as a natural extension of the Department of Labor Protection and Welfare’s “White Organization” project – but with more teeth.

For human rights reasons there is no mandatory drug testing under the White Organization project, but hotels in the White Hotel project will be able to work together with police to organize mandatory random drug testing of employees, he explained.

Phuket City Police Superintendent Wanchai Ekpornpit pointed out that flaws in the current drug testing regimen are an obstacle to success.

“The police will do the urine test and get the preliminary results on the same day. However, the urine then needs to be sent to the Medical Sciences Center for Region 11 in Surat Thani for final confirmation, a process that typically takes one or two months,” he said.

Even when the results do return they are often at variance with the original results, he said.

“I had a discussion with the Vachira Hospital director a few days ago about the need to get a urine testing machine in Phuket as a way to solve the drug problem,” he said.

The Westin Siray Bay Resort and the Sinthawee and iPavillion hotels will be the first three to take part in the project, it was announced.

Phuket flood aid on its way to Lopburi