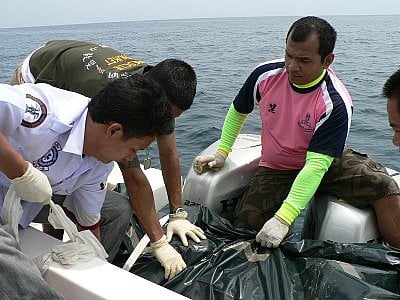 PHUKET: The body of the foreign man found floating in the sea south of Phuket last month will be buried at the Mai Khao Cemetery if it remains unidentified, the Phuket Gazette has been told.

The corpse is currently being held at Vachira Phuket Hospital in Phuket Town.

“The hospital has already contacted me and said that if no relatives claim the body within the next few days, the Kusoldham Rescue Foundation volunteers will bury him at the Mai Khao Cemetery,” said Chalong Duty Officer Nitikorn Rawang.

“If relatives show up after that, they will have to contact the foundation to claim the body,” he said.

A source at the hospital explained to the Phuket Gazette that in cases involving the death of an unidentified or unclaimed foreigner, the body is kept at the hospital for one month before final disposal is arranged.

In this particular case, the unknown man died before being transferred to the hospital. In these circumstances, the police have primacy on any decision as to the body’s final resting place, the Gazette‘s source explained.

Any person who believes they may know the identity of the man is urged to call Capt Nitikorn at 084-070 6667.