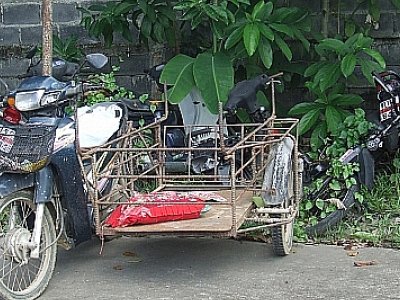 PHUKET: A man killed his two-year-old daughter and took his own life with lethal doses of the herbicide paraquat last week, Phuket City Police have confirmed.

A witness to the tragedy, 25-year-old Aekkachai “Champ” Suksai from Nakhon Sri Thammarat, told the Phuket Gazette he was making coconut milk at a shop near Koh Sireh Circle last Thursday when he saw a man arrive on a salaeng (motorbike with sidecar) with a young daughter who appeared to be asleep.

After stopping at a grocery store next to the shop, the man began vomiting violently.

Another witness called police and Kusoldharm Foundation workers who arrived and sent the pair to Vachira Phuket Hospital for emergency treatment.

The mother was contacted and went to the hospital.

The little girl died the following day, her father died on Sunday.

Duty officer Anirut Pattarawiwat confirmed the cause of death as ingestion of the herbicide paraquat.

“He took the herbicide Gramoxone (paraquat), but we’re not sure how much he drank and gave to his daughter,” he said.

Paraquat remains a popular agent of suicide in many parts of the world due to its high toxicity, low cost and widespread availability.