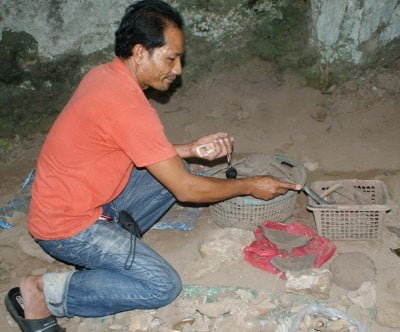 PHUKET: A trove of ancient artifacts unearthed in Krabi recently could be up to 3,000 years old, experts at the Fine Arts Department Office in Phuket have estimated.

Reporters invited by a village headman in Baan Klang subdistrict, Ao Luek, were the among the first to view the items, discovered by residents of Baan Khao Ngam village last week.

Ban Khao Ngam headman Supoj Matbutra informed the press that villagers had found numerous artifacts near Pha Khao Ngam, the single hill and cliff formation at the center of the village that gives it its name.

Mr Supoj escorted reporters to an area near the top of the cliff where they had marked a “no entry zone” to protect the site from treasure seekers.

Inside the protected area they were shown a pile of earthenware, hundreds of big animal bones and exotically-shaped objects carved from stalagmites and stalactites.

One carving that amazed reporters resembled a human face.

About a month ago, villagers were excavating the rich soil in the area for use as fertilizer for growing oil palms and fruit trees, Mr Supoj said.

“They unearthed ancient jars and earthenware. Some were damaged, but others were in perfect shape,” he said.

“They also uncovered a stone axe and assorted tools, together with a large number of beads,” he added.

After, the Krabi Provincial Culture Office and 15th Regional Office of Fine Arts in Phuket investigated the find, they informed Mr Sopoj that the artifacts likely dated back at least 3,000 years.

The investigating teams told Mr Supoj that they considered the Pha Khao Ngam area as one of the best-preserved ancient settlement sites in the Andaman region.

Believing that area was once a settlement, the researchers hope to learn more about its ancient inhabitants and preserve it as a historical site and tourist attraction, said Mr Supoj.