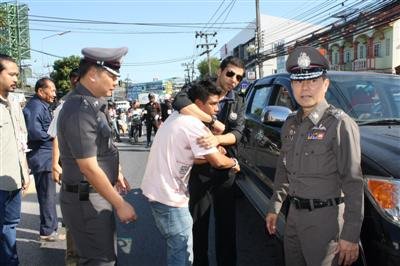 PHUKET: A 32-year-old man has confessed to the murder of German expat Wolf Kesselheim, telling police he acted alone and in self-defense.

Chalong police arrested Pittaya Srijitraporn yesterday evening at Kata viewpoint, where he made a living charging tourists to pose in photographs with sea eagles.

Mr Pittaya was paraded before the media at a press conference at Chalong Police Station this morning.

He admitted to stabbing 66-year-old Mr Kesselheim, who was stabbed to death in Chalong on Wednesday night.

Mr Pittaya said he had just picked up his two young cousins from school and was driving them home on his motorbike when the incident took place.

He confessed to cutting off Mr Kesselheim’s pickup truck at around 7pm outside Chalong Police Station.

This angered the German, who followed the three Thais in his pick-up to Chalong Circle, shouting at them along the way.

Both vehicles turned off the traffic circle onto Viset Road, heading towards Rawai, with the German honking his horn angrily.

Eventually, Mr Pittaya pulled over in front of the German’s truck, forcing him to stop in front of a 7-Eleven. He claimed Mr Kesselheim was too drunk to talk the incident through.

Mr Pittaya said the German got out of the truck and punched him in the face, starting a scuffle he realized he could not win against the larger man.

When Mr Kesselheim got him in a headlock, the Thai stabbed him with a knife.

After the elderly German fell to the ground, Mr Pittaya and his cousins fled on the motorbike.

Mr Pittaya also claimed that at the time of his arrest he was unaware Mr Kesselheim had died of his injuries.