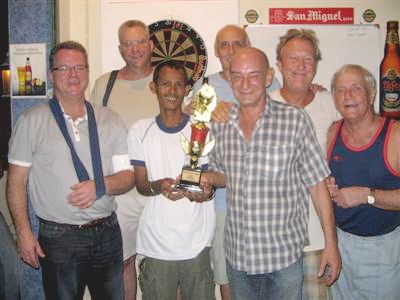 Piccadilly’s Jim hit a 180 to take the high score, while Queen Mary’s former owner Steen had an upset singles win over Tony, one of the best players in the league.

In other matches, newcomers Ryan’s Daughter playing at their venue on Soi Kebsup couldn’t keep up with Eric and the boys of Boozers Bar, losing 7-3.

Over on Nanai Road, the battle of the Irish bars saw Market Bar overcome Celtic 8-2.

Sadly, Celtic player Don died of heart failure the following day. The entire PDL mourns his passing and sends condolences to his family and friends.

In the only other match, Shakers came back from a 3-0 deficit to win all remaining games and take the win, 7-3. Josh was the hero for Shakers, hitting the x1 on his first dart in the beer leg and winning a round for his team. Paul of Beach House also had a nice close on 62 earlier in the evening (t10,d16).