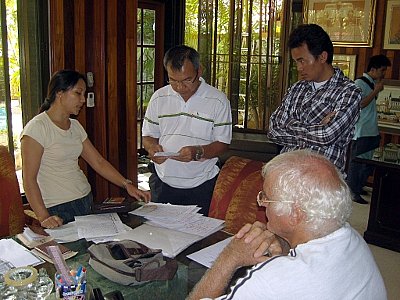 PHUKET: A 74-year-old American man and a woman from the Philippines are facing being deported to their home countries after being arrested and charged in Phuket with working without a work permit and overcharging interest on private loans.

Both deny the charges against them and have been released by the Phuket Provincial Court on bail of 100,000 baht each. A court date for the hearing has yet to be set.

Although the charges were filed by Thalang Police, the arrests were made by Phuket Immigration officers, Lt Col Somkid explained.

“Our investigation revealed that Mr Granata has been doing this for more than two years,” said Maj Kaken Nikornhatsachai of Phuket Immigration.

“He has at least 500 clients, each with a loan on average of about 30,000 baht – that’s about 15 million baht in loans in total. Most of the borrowers are Filipinos and he was charging them 10% interest per month…

“One of his borrowers had been paying this rate for two years,” said Maj Kaken.

Under the Thai Civil and Criminal Code, personal loans are limited to a maximum interest rate of 15% per annum.

Maj Kaken also alleged that Mr Granata held onto borrowers’ passports until the debt was repaid – much like most motorbike rental operators in Patong.

To test the informant’s allegations, the officers watched from a distance as the informant staged a cash loan repayment to Mr Granata and Ms Alpay in the car park of the Tesco Lotus store in Cherng Talay.

After the informant handed over the money, the officers moved in and identified themselves.

Armed with a search warrant, the officers then searched Mr Granata’s house.

In the home, the officers found one set receipts of payments from 27 different borrowers, and another stack of receipts from a further 22 borrowers.

They also found lists of names of borrowers and at least 20 loan agreements in the drawer of a desk.

No passports of any borrowers were found in the raid.

“If they are found guilty of the charges against them, they will be deported. The case will probably take about three months in court,” said Maj Kaken.