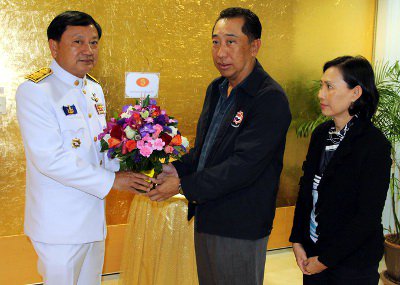 Mr Vorasit is currently receiving treatment at Bangkok Hospital Phuket in Phuket Town for injuries sustained in the incident. He was stabbed in the stomach and suffered a wound to his neck delivered by a blow with a makeshift axe.

In a goodwill gesture, HRH Princess Sirivannavari Narirat offered flowers to Mr Vorasit. Governor Tri delivered them to Mr Vorasit on her behalf as the royal envoy.

The gift was accepted by Mr Vorasit’s father, Songkran Issara, and other family members.

Governor Tri voiced his concern for Mr Vorasit’s condition and wished him well. He also told Mr Vorasit’s family how sorry he felt about what had happened.

Mr Sonkarn responded by thanking the Governor for his concern for his son and for taking an interest in the case.

Governor Tri went on to say that he had signed an order to close the venue of the crime for 90 days.

“Phuket City Police filed a request to the Phuket City District Office to temporarily close the Rachada pub. They have passed that request to me and I have signed it. It will be closed for 90 days starting from January 5, 2012,” said Governor Tri.

“This is just an initial measure. If the pub again breaks the law by failing to close at the mandated time, their license to operate a night entertainment venue will be revoked.

“This case is a serious offence and could damage Phuket’s tourism image,” Gov Tri said.

“I urge the police officers involved to handle this case quickly and carefully,” he added.

In a final statement Governor Tri said that before the new year holiday the Ministry of Interior had instructed him to ensure that entertainment venues did not open later than allowed by law.

“We have always cooperated. We will now reform the special investigation team to monitor all night-time entertainment venues closely and make sure that they close on time.

“Each nightclub has different operating hours determined by the license. Rachada pub’s license specifically states that they are allowed to operate only until 1 am,” he said.