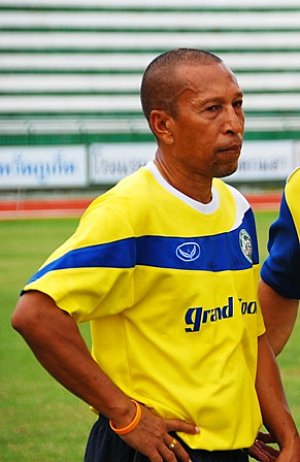 Director Soranan said “Coach Sompong still has responsibilities with the Port Authority of Thailand and hasn’t had much time to train the players. We have asked Coach Apichart “Mo” Mosika to caretake for tomorrow’s game in his place.”

Apichart said “I will leave next week even though there is still one match left, but the outcome won’t affect Phuket’s survival in Division 1 anyway.”

It is not known yet who will take control of the team for Phuket’s last match of the season away to Chainat FC.

The starting line up for Saturday will be missing a few big names including Kone Adama who has already joined a new club in Myanmar. Speaking to the Gazette today Kone said, ” I have signed with Yadanarbon FC on a one-year-contract and the league starts on January 8.”

Also missing will be Jonathan Matijas who has already left Phuket and celebrates his 22nd birthday today in Bangkok.

Net minding for the last game at Surakul will be Phuket boy, Luechar Janthawong. Should Leuchar suffer an injury, remarkably it will be Abdoul Coulibaly who will deputize in the Phuket goal. Coach Apichat said “He suits the role of reserve goalkeeper best because he is the tallest.”

In defense, Wiratrot Chanteng and Nene Bi Tre Sylvestre will zone the center while Jongrak Pakdee and Suphat Aonthong will secure the left and right flanks respectively.

Kick-off for Saturday’s match, Phuket’s final home fixture of the season, will be at 6pm at Surakul stadium.