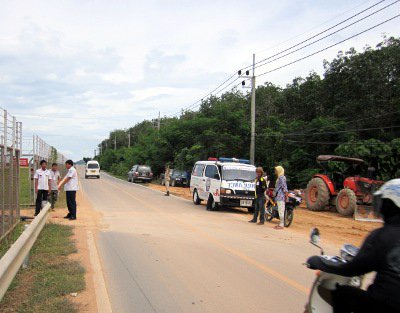 Tah Chat Chai Police Lt Col Prakob Boonkwan received a report at 2pm saying that a motorcycle had slammed into a 10-wheeled truck on the road that runs alongside the runway at Phuket International Airport.

“Witnesses reported the motorcycle coming from the airport and heading towards Thepkrasattri Road at high speed. Meanwhile, the 10-wheeled truck loaded with soil was pulling out onto the road.

“The man riding the motorcycle lost control and slammed into the truck,” said Lt Col Prakob.

Mr Winai told the Phuket Gazette, “The day before the accident, Somkwan was helping me post election campaign signs. He asked for time off and said he would be back later to help, and then I received a call about the accident.

“His family is poor. I will help them as much as I can,” he added.

Police have yet to decide whether or not to press charges.

Joker in the pack for French rugby