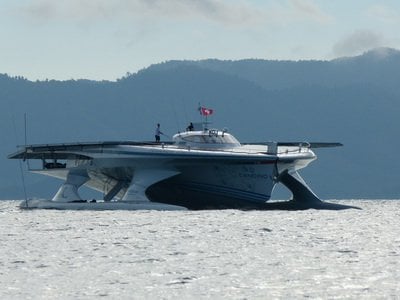 PHUKET: Having seen the Phuket Gazette‘s report yesterday about the imminent visit of the solar-powered Turanor to Phuket, local expat resident Mark Branson was inspired to watch the vessel’s arrival this morning.

With the boat’s arrival at Phuket’s Ao Por marina estimated at 0730, Mr Branson left home at 6am to see the creation that had caught his imagination.

He was well rewarded.

Proof that the future is now slipped into view majestically at 0710, and in an uncanny silence slipped alongside its berth at the outer perimeter of the marina at 0733, Mr Branson told the Gazette.

“It was a moment of great emotion for me as I am a keen photographer,” he said.

“The Turanor arrived with the grace of a manta ray. There was just a very slight disturbance of the water, produced by the electric motors, when she docked. I so love the silence. It is the ‘noise’ that I prefer, and it is endangered in Phuket,” he added.

Perhaps the Turanor is eco-friendly not only because of her distaste for fossil fuel, but also because she respects silence wherever she goes.

The magnificent vessel began its circumnavigation of the world 13 months ago, from Monaco, traveling westward to the Panama Canal and onward to Phuket. She leaves us on Wednesday, headed for the Indian Ocean, the Suez Canal and into the Med for her final run home.