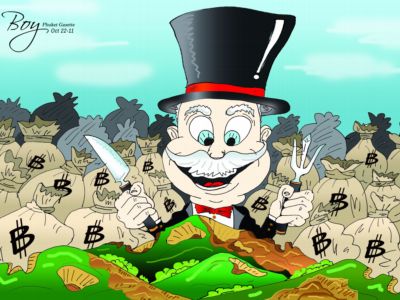 PHUKET: The safety of tourists visiting Phuket is always a key concern among local officials, and nowhere on the island is the issue more important than in Patong, which has the island’s highest density of visitors and hotels.

Several agencies play roles in tourist safety there, but none assume greater responsibility than the Patong Police, who currently have 180 officers on ‘active’ duty.

This is hardly enough for the town’s registered population of about 20,000, not to mention untold numbers of migrant workers from other parts of Thailand, Burma, Nepal, Cambodia and who knows where else – as well as a large and robust population of nocturnal expats.

Added to this are the droves of tourists who fill the 14,821 rooms in the 264 registered accommodation establishments in Patong. (The actual number of rooms available there is probably at least twice that figure.)

Even by conservative estimates, the number of people in Patong will likely exceed 100,000 this coming high season. Because the police work regular eight-hour shifts, one must presume that at any given time only one-third are on duty – about 1,666 people per officer.

This is hardly an encouraging ratio given the amount of alcohol and methamphetamine abuse in a town where law has never been of any particular significance.

Factor in the widespread publicity that accompanies the seemingly endless violence reports, particularly those detailing disputes between tourists and private transport operators, and the need for Patong Police to seek assistance becomes obvious – at least in theory.

For background on this story, see our report in the current issue of the Phuket Gazette. (Digital subscribers click here to download the full newspaper.)

Patong Police do enjoy support from 40 “volunteer officers”, half of whom are foreigners, as well as a small contingent of Tourist Police and their Patong-based volunteers.

But all tallied, the current manpower will hardly be enough to ensure adequate security in the coming high season when record-breaking tourist arrivals are expected.

The Phuket Gazette agrees in principle with making better use of civilian volunteers, especially some of those on the “front lines” who spend a great deal of time interacting with tourists.

However, we would urge the police to conduct, as credibly as possible under the circumstances, background checks to make sure that those who apply for the positions are not themselves criminals or otherwise likely to succumb to corruption, which is systemic.

Patong does not need to add mercenaries to the fight against fair trade.

Phuket Opinion: Amid the many bus and van crashes killing tourists in Phuket, it’s time to focus more carefully on responsibility