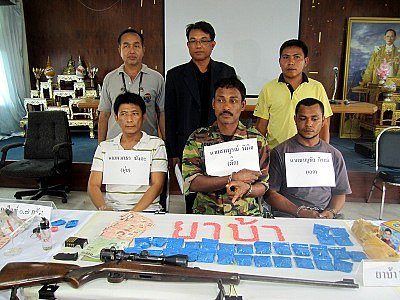 PHUKET: An anti-drug squad in Thalang District, which covers most of the north of Phuket, last night nabbed four people for drugs, culminating with the arrest of an alleged dealer with more than 5,000 pills early this morning.

The squad, comprising four Thalang Police officers and officials from the Thalang District Office, began the night’s work with the arrest of an 18-year-old at a house in Moo 9, Thepkrassattri sub-district, at about 8pm.

The young man was charged with possession of four ya bah (methamphetamine) pills and handed to the Phuket Juvenile Observation and Protection Center.

In his statement, the teenager claimed that he bought the drugs from Somboon “Tuck” Pinit, 45.

The team moved to arrest Somboon, but while doing the rounds the officers arrested Chanchai “Eak” Phirom, 28, on the Na Nai–Pakrongcheep Road in Thepkrassattri at about 9:30pm.

Chanchai was charged for possession of three ya bah pills, with intent to use.

The team later arrested Somboon at a house in Baan Khanaen village in Thepkrassattri, at about 12:40am.

Charged with possession of drugs with intent to sell, Somboon told police that he sourced his ya bah from Pongsathorn “Nui” Mangka, 40.

Somboon’s statement led to the arrest of Pongsathorn in front of his house at Baan Suan Neramitra 3 in Srisoonthorn sub-district at about 4:30am today.

Pongsathorn was found with 50 ya bah pills on his person.

A search of his house uncovered 300 more ya bah pills as well as 0.7 grams of ya ice (crystal methamphetamine) and 6,500 baht in cash.

Pongsathorn was charged with possession of drugs with intent to sell.

At a press conference at the Thalang District Office this morning, Phuket Vice Governor Weerawat Janpen thanked the community for the tip-offs.

“I would like to thank the people for the information that led to these four arrests,” he said.

“Thank you for having eyes on crime. It is very useful,” he added.