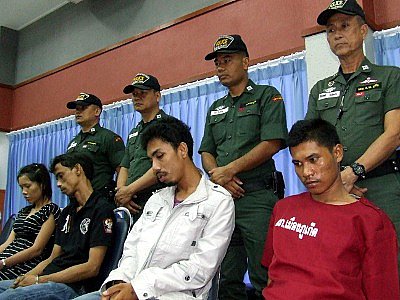 PHUKET: A small pier popular for tourists heading out to the islands in Phang Nga Bay was a major drug-trafficking portal, Phuket police revealed today.

The news was announced by Phuket Provincial Police Commander Pekad Tantipong at a press conference to present to the media four suspects arrested for trafficking ya bah (methamphetamine) and ya ice (crystal methamphetamine).

On show at Phuket Provincial Police Station were about 25,900 ya bah pills, more than a kilo of ya ice, four guns and more than 160,000 baht in cash.

All four had confessed to charges of possession of drugs with intent to sell and illegal possession of firearms and ammunition, police said.

Following up on Wichai’s arrest, the officers then moved to arrest Sunaree and Suphan, who together were found in possession of 643 ya bah pills, 21.3 grams of ya ice, two guns and 159,060 baht in cash, police said.

Adul brought a lot of drugs into Phuket by a longtail boat from Phang Nga, he added.

After organizing a delivery, anti-drugs officers arrested Adul at the pier.

Maj Gen Pekad said that tip-offs from the public had identified 705 locations on Phuket, such as guesthouses, hotels, nightclubs and neighborhoods, as centers for dealing drugs.

So far, police investigations have confirmed 57 of those locations as drug-distribution centers, he said.