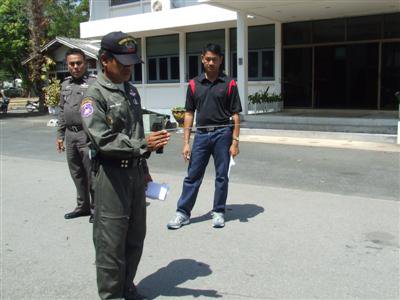 PHUKET: The Science and Technology Ministry is set to test the effectiveness of the Alpha 6 ‘molecular resonance’ substance detector in use by anti-drug agencies in Phuket.

The move comes after tests on the similar GT200 bomb-detection device revealed it was ineffective.

Prime Minister Abhisit Vejjajiva said double-blind tests carried out by the Science and Technology Ministry showed the GT200 succeeded in detecting explosives in only four out of 20 tries.

“The result has no statistical significance. The performance is equivalent to random chance,” he told reporters last week.

PM Abhisit has ordered a review of the use of all ‘molecular resonance’ bomb and drug detectors following the test results.

“Scientifically speaking, dogs have already been proven to be more efficient than the bomb detectors,” he said.

Any agencies willing to continue using such detectors would do so ‘at their own peril’, he added.

Critics of such devices claim they are little more than dowsing rods.

Makers claim the devices are powered by static electricity from their user and can detect specific contraband substances from up to 300 meters away.

Thailand has spent between 700 and 800 million baht to acquire some 1,000 dowsing devices in recent years, Mr Abhisit said.

All agencies using such gear must report to him how many devices they have, how they use them and how much they spent for the discredited technology, he said.

The science ministry will test the Alpha 6, which sells for around 400,000 baht, with the same techniques used to examine the GT200.

Of the eight devices in use in Phuket, the Interior Ministry bought six and Phuket Provincial Office two. They are used by drug suppression units at a number of police stations on the island including Tah Chat Chai, Phuket City, Kathu and Thalang as well as by the Phuket Provincial Police.

All eight devices have been in use for around two months, following a launch ceremony in late December 2009.

Police at Tah Chat Chai Checkpoint are using their Alpha 6 in an effort to detect drugs coming onto the island.

“Though I have never heard a report of officers finding drugs with this device, it is still in use at the checkpoint,” Tah Chat Chai Police Superintendent Sakchai Limcharoen said.

Wirote Suwanwong, who heads the provincial drug suppression unit, said his men have been using two of the devices and insisted they were effective.

The devices had been used in the recent seizure of 2,080 ya bah pills, Mr Wirote said, though he admitted the drugs were found in a small room.

“If they didn’t work I would have reported that fact to Phuket Governor Wichai Phraisa-ngop,” he said.