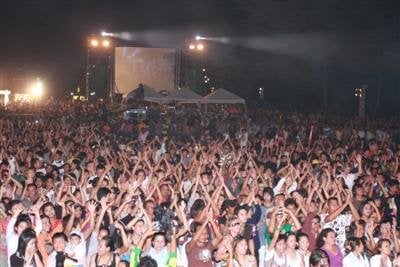 PHUKET: The results of the Phuket Gazette Readers’ Poll closed yesterday show that opinion is divided over whether Karon Beach is an an appropriate venue for mass-audience, outdoor concerts like the ‘Roy Fest’ held in September.

Readers were asked which of four responses best match their views on the following question:

“With the ‘Roy Fest Phuket Music Festival’ in September and the subsequent revelry at the ‘Chang Regatta Moonlight Night’ full moon party in December, Karon Beach appears to be the new spot for large crowds of night-time revelers. With this in mind, which of the following statements best matches your view of this development?”

By a very narrow margin, the most popular answer was:

“It’s a disgrace. The beach is left covered with debris and it totally ruins the natural charms of the once quiet and beautiful Karon Beach. It has also damaged the sand dunes there.” (30.4%)

The second most popular response also reflected concern for the environment:

“These types of events are fine, but it would be better to hold them in Patong and preserve Karon in a natural state.” (30.2%)

Not far behind in third was the view:

“It’s great for Phuket. The parties are a blast and they will further enhance the island’s international reputation as a place to party and bring in more tourists.” (26.6%)

The opinions were roughly the same in all three demographics: Thai nationals (143 voters), local foreign residents (319), and tourists or visitors to Phuket (241).

Note: The Gazette Readers’ Poll only reflects the views those who choose to take part.