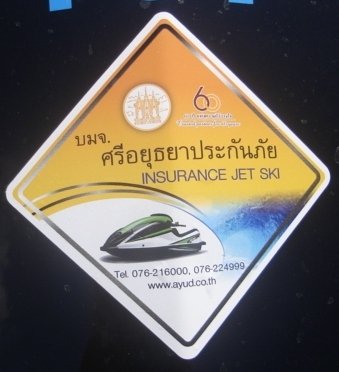 PATONG, PHUKET: Despite the mandatory insurance scheme for rental jet-skis that went into effect last month, problems between jet-ski operators and tourists persist  and scores of unregistered jet-skis continue to operate in Patong Bay.

Marine Transport Department officer Songchai Na Nakorn told the Gazette forty-one jet skis in Patong are currently out of service because their insurance applications are still being processed.

“There are currently 219 licensed jet-skis with insurance, 126 in Patong and the rest in Kamala, Kata-Karon and Bangtao. Patong has 41 that are still unregistered. The owners haven’t brought their jet-skis into the system yet because ownership documents were lost or damaged in the tsunami [five years ago].

“After the Phuket Governor issues an official letter, ownership documents can be re-issued and the owner(s) can apply for the insurance. In the meantime they are not allowed to operate on a rental basis,” he said.

Despite the insurance scheme, tourist complaints about being scammed by jet-ski operators continue unabated.

Phuket Jet Ski Club vice president Singthong Charoensap said there were over 75 jet-skis operating in Patong Bay that were completely outside the registration and insurance system.

“Right now there are over 200 jet-skis being rented out in Patong, but just 126 legal ones. The 200 include the ones that are [supposed to be] out-of-service pending receipt of the Governor’s letter,” he said.

If the renegade jet-ski operators don’t cease after the letter is issued, the owners of the legal jet-skis will pay a visit to the Governor, he said.

Operators who register are currently at a competitive disadvantage compared to their renegade counterparts, he said.

“We have to pay the insurance costs of about 8,000 baht each and bear additional expenses, such as registration renewal fees. Meanwhile, the illegal ones don’t pay anything but continue to operate. It’s not fair,” he said.

There are still some complaints from tourists being overcharged by operators, including those who do have insurance, he said.

“Recently one foreign guy damaged a rental jet-ski and the operator asked him for 1,000 baht to repair it plus 15,000 baht in additional compensation, saying the jet-ski would need to be out of service for five days while the repairs were carried out. In fact the jet-ski was rented out again the very next day, so the tourist filed a complaint with the Tourist Police, who came to help work out a solution,” he said.

Like tuk-tuk drivers, jet-ski rental operators have been at the center of an endless stream of harsh tourist complaints over the years.

Hundreds of such complaints have been posted in the Gazette Online’s Readers’ Forum over the past three weeks alone. While most of these are currently focused on the tuk-tuk problem, many draw parallels with the damage done by jet-skis to Phuket’s tourist industry. The complaints in question can be seen at the bottom of our stories of Dec 12, Dec 20, and Dec 29 (here and here).

In a Gazette reader’s poll taken before the jet-ski insurance scheme was put in place by Phuket Governor Wichai Phraisa-ngop, 53.8% of those casting votes wanted the skis banned outright with immediate effect, while another 19.4% called for a gradual phase-out. It was hoped that the mandatory insurance scheme, the first of its kind in the world, would minimize the number of tourist complaints about jet-skis.

Phuket tuk-tuk driver goes into hiding after assault on tourists