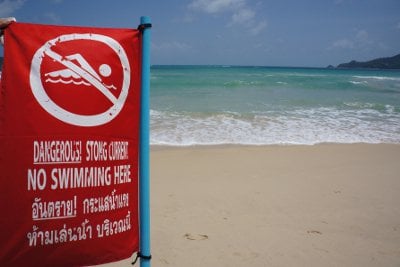 PHUKET: While there is a broad consensus that more needs to be done to warn visiting tourists of the dangers of monsoon-season surf, Phuket Gazette readers are divided over what method would be the most effective at getting the message out.

In the online poll, the Gazette asked readers:

“The monsoon season is here and once again hardly a week goes by without a tourist drowning in the surf off Phuket’s west coast beaches. Which of the following approaches do you think would be most practical and effective to minimize the death toll?”

Readers were almost perfectly divided on the issue, with about one-sixth of all taking part in the poll, voting for one of the six choices, as follows:

Voters identifying themselves as Thais (29%) and tourists (24%) were more likely to choose the ‘Have inbound flight captains issue safety warnings about surf conditions’ than expats (9%).

There were few other notable demographic trends in the polling, in which 1,781 readers took part over a two-week period.

To vote in our new poll, on tourist safety in Phuket, click here.

To comment on the results or the topic of surf safety in general, use the Readers’ Forum below. The Phuket Gazette values all input that meets our house rules.