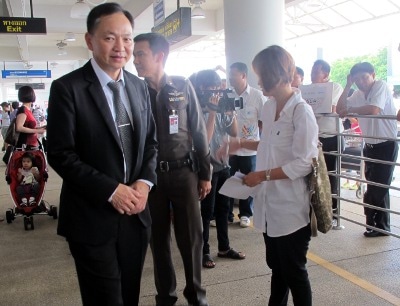 The announcement follows Police joining forces to launch a campaign in March to put a stop to illegal taxi drivers overcharging people, and to stop tour guides and touts from harassing arriving passengers before they leave the airport.

“Though sometimes people tried to cheat tourists or steal their belongings, we did our best to control and eliminate the problem, so as to make tourists feel 100 per cent safe while they are at the airport,” Mr Prathuang explained.

He added that the airport was critical in providing new arrivals with a positive image of Phuket as it is the first place they see when arriving on the island.

Also at the press conference, held at the airport, Mr Prathuang noted that the airport renovation project was scheduled to start in August and be complete by the beginning of 2015.

The renovated airport will be able to handle about 12.5 million passengers.

“Last year, we had a total of about 8.4mn passengers, but our airport was designed to handle only about 6.5mn,” he said.

“Already this year, we have seen a 12 per cent increase in the number of passengers month on month compared with last year,” he said.