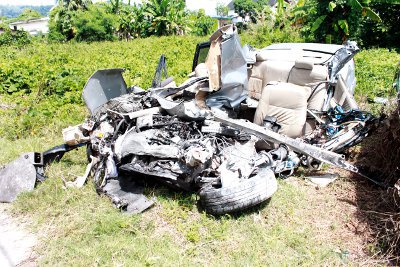 PHUKET: The handing down of the court sentence to the driver of a refrigerator truck that killed four Swedish tourists and their Thai driver in Phang Nga early in February, has been deferred for the second time, the Phuket Gazette has learned.

The driver, 27-year-old Muhummadyukee Jehyusoh, turned himself in to Khok Kloy Police on February 3, two days after the refrigerator truck he was driving crossed over a median strip in Khok Kloy District and crashed head-on into a compact car driven by 26-year-old Wichit Phromluang of Udon Thani.

It is still unknown what caused Mr Muhummadyukee to lose control of the vehicle; he was en route to Phuket with a shipment of fish when the tragedy occurred at 7am.

Mr Wichit and his four Swedish passengers, on their way to Koh Tao in Surat Thani, were all killed instantly in the incident.

Mr Muhummadyukee walked away from the collision unhurt and fled on foot, but surrendered himself to police after conferring with his employers at the Chotepatama Company in Narathiwat.

News of the tragedy made international headlines and sent the town of Varberg in Sweden, from which all four hailed, into a state of mourning.

Mr Muhummadyukee was released on 300,000-baht bail three days after the crash. He was originally expected to appear in court on February 14, but that court date was later deferred until June 19.

After Mr Muhummadyukee did not appear in court on June 19 as scheduled, an officer at the Phang Nga Provincial Court confirmed that the sentencing had been deferred again until July 26.

The Phang Nga Public Prosecutor involved in the case told the Gazette that he had been informed of the court postponement, but declined to give further details.

When the Gazette called the Phang Nga Court on June 21, an officer there said a representative of the insurance company that insured the truck for the Chotepatama Company had told the court that his firm had agreed to pay out 1 million baht to the families of each of the deceased Swedish tourists.

As he failed to produce any documentation to back up this claim, the court ordered him to produce proof of payment on July 26, the official said.

The insurance company had already reached a settlement with the family of Mr Wichit, but the exact amount paid to the family was unknown because the case file had been transferred to another department, the officer said.

Mr Muhummadyukee has already been charged with one count of reckless driving resulting death, which carries a maximum sentence of 10 years in prison and a maximum fine of 20,000 baht, or both.

He also faces an additional charge for fleeing the scene of the accident, a court official said.