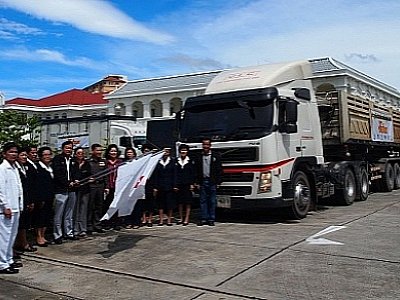 PHUKET: As Bangkok braces for more floods, which some experts say may last up to a month, Phuket officials yesterday dispatched a second convoy loaded with flood-relief items to help those affected by the disaster.

A total of 18 trucks left the Phuket Red Cross center at Saphan Hin. They are expected to arrive in Bangkok tomorrow morning.

There to see off the rolling mission of mercy were Phuket Governor Tri Augkaradacha and his wife, Nalinee Augkaradacha, who is also the president of the Phuket Red Cross.

Joining them were Phuket Provincial Police Commander Pekad Tantipong and a slew of government officers and representatives from local businesses.

“This time the donations include 2mn baht cash,” he added.

Gov Tri urged people to keep the donations pouring in.

“We will continue send relief supplies for flood victims… More than 800,000 households in 62 provinces have been affected. We need to help them to get through this disaster and we will keep sending supplies to help them recover after the floods,” Gov Tri added.

Although details of the event had yet to be finalized, Maj Gen Pekad said, “We will be holding an event under campaign slogan ‘Phuket together for Thais 2011’.

“This event will be coordinated by the Phuket Provincial Office and Phuket Police. We expect to collect more than 5mn baht in donations to help the victims,” he added.