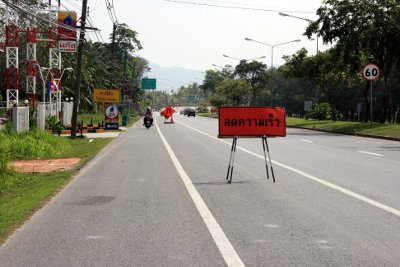 PHUKET: The Phuket Highways Office has closed one southbound lane at the Kor En ‘death bend’ as a temporary measure to stop more accidents at the notorious black spot in Thalang.

Also installed as temporary measures are signs warning motorists to slow down and small concrete blocks separating the vehicles exiting Baan Kor En from the traffic speeding past heading toward Phuket Town.

The move follows the tragic accident on November 20 that killed four-year-old boy Anupong Sae-Yu and his aunt Malai Kaewkluan.

The accident prompted local villagers to take to the road in mass protest, forcing the closure of the two southbound lanes.

The mob refused to budge, demanding government action to make the road safer. Only after Phuket Vice Governor Somkiat Sangkaosuttirak and Phuket MP Raywat Areerob had arrived and heard the villagers’ grievances in person, did the villagers disperse, at about 7:45pm.

By 4am the next day the warning signs and concrete blocks were in place, ahead of an emergency meeting at Phuket Provincial Hall last Monday, where a battery of Phuket officials pondered other steps that could be taken to reduce the number of accidents at the site.

The meeting was one of the conditions agreed to the night before by Vice Governor Somkiet.

At the meeting, V/Gov Somkiet pointed out that the lay of the land and the road itself were inherently dangerous.

“It’s an engineering mistake on the road due to the geographical condition,” he said.

Pramote Pirat, Deputy Director of the Phuket Highways Office, said his office will install “S curve road ahead” warning signs in the hope of inspiring motorists to slow down.

“For the long term, we would like to see a road checkpoint set up just before the curve to slow drivers down. We also plan to install flexible plastic traffic poles in between the two lanes to make sure motorists must drive slowly through the curve. However, we should consult the local villagers about this,” said Mr Pramote.

“We have been trying to expand the outbound lanes, so we can reduce the sharpness of the curve overall. Ideally, we would like the road to be straight.

“But the problem is that the expropriation of the land beside the road has been in process for at least three to four years. As a result, we have not been able to continue with that part of the road improvement project,” he said.

Thalang District Chief Nuenart Supattaraprateep said the corner had claimed many lives over the years. “Accidents occur at this site frequently. This morning, before this meeting, there was another car accident,” he said at the meeting.

“It’s very worrying because this spot is where students wait for buses. I think we need to fix the problem very soon,” said Mr Narong.

Southern Thai football is charging ahead with Krabi and Pattalung