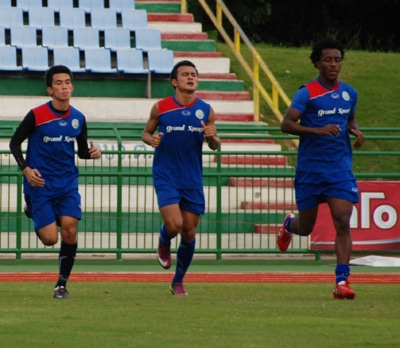 PHUKET: After a month-long league lay-off FC Phuket drew with Saraburi FC Warlords in a heated match on Saturday evening with a final score of 2-2 in their Division One encounter.

The match was played in front of a crowd of 2,500 at the Saraburi Provincial Administration Organization M150 Stadium.

Phuket went ahead in the 16th minute from a strike by Watcharapong Jun-ngam, who capitilized from a blunder by Saraburi’s goalkeeper.

Saraburi’s response came 13 minutes later with an equalizer by Eakapop Sanirwonga, who scored from a tight angle off a free kick on Phuket’s goal line.

The score remained 1-1 into half time.

Sarach Yooyen, back from a disappointing SEA Games campaign in Indonesia, put Phuket ahead again in the 67th minute with a direct free kick taken from the left wing. Though the goal was credited to Sarach, the ball was helped in by the head of Watcharapong Jun-ngam, whose signature boot-polishing celebration clearly infuriated the home crowd.

FC Phuket might have won had they kept a cool head, but it was the curse of a former player, Choi Jaewon from South Korea, who scored the equalizer in the 78th minute from a penalty.

Jonathan Matijas was carded following a dramatic save which was deemed a foul by the referee and a spot-kick was awarded.

In addition to Matijas’ booking, the other Phuket yellow cards went to Coulibaly Abdoul and Nenebi Tre Sylvestre and Watcharapong Jun-ngam.

Saraburi’s only yellow card went to Samart Panya in the 20th minute.

The draw was enough to put FC Phuket into 4th place with 43 points. However, following PTT Rayong’s 5 – 0 trampling over Songkhla FC on Sunday – this season’s biggest upset so far – Phuket fell back into fifth place.

TPL Division One Results this weekend:

Pick up an edition of this week’s Phuket Gazette for a full report on the match and all local sports.