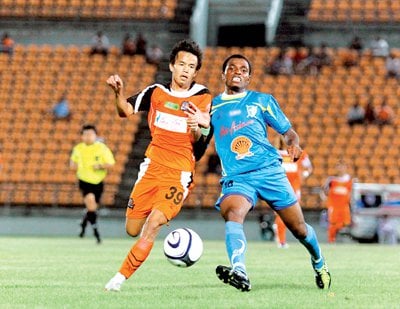 PHUKET: Southern Thai football is charging ahead with Krabi FC and Pattalung FC each prevailing at the top of their respective groups in the Thai Premier League (TPL) 2011 Division Two AIS League promotion playoffs.

The playoffs, which began in October and are set to conclude in December, divide 12 fine finalists into two groups of six. Upon conclusion, only the top two of each group will be promoted up to replace the bottom four relegated teams of TPL Division One.

From a total of 77 teams competing in the TPL Division Two AIS League, the final cut of 12 include the respective champions and runners-up from each of the five regional leagues (South, Bangkok, North, Isarn, and Central-Eastern) in addition to the two best-performing third-place finishers.

In sealing their playoff berths, Krabi was throned 2011 Southern champions – the same prestige FC Phuket won last year leading up to their promotion – while Pattalung had to be content as runners-up.

Clear of the halfway mark after seven of the 10 scheduled fixtures, both southern sides look promising in their campaigns.

Persisting on top of group A, the Pattalung Swiftlets now have 14 points from four wins, two draw and a loss. They are closely trailed by the Central and Eastern Regional champs, Ratchaburi FC (13 points). In third place of the group is Phitsanulok FC (10 points), followed by Loei City (9 points), Phichit FC (7 points) and Kasetsart University (4 points).

In their opening match on October 15 against Bangkok regional champs, Kasetsart University, Pattalung were victorious after scoring the match’s sole goal.

The Swiftlets suffered their first loss of the playoffs in an away-match on November 6 against Central and Eastern regional champs, Ratchaburi FC, with a final score line of 0 – 2. Pattalung redeemed that loss the following week on November 12 beating Northern region champs, Phitsanulok FC, two goals to nil. In the away leg at Phitsanulok on November 19, Pattalung managed a 1 – 1 draw. On Saturday 26 November Pattalung drew with Ratchaburi, nil – nil at home.

With 17 points from five wins and two draws the currently undefeated Krabi Andaman Eagles are on top of Group B, trailed by Nakhon Ratchasima FC (13 points), Rayong FC (11 points), Roi Et United (9 points), followed by North Bangkok College (5 points) and at the foot of the table the Lamphun Warriors (3 points).

In their opening and away match on October 16, the Southern region champions earned a point from a goalless stalemate against Central and Eastern region runners-up, Rayong FC. Then in a home fixture on October 23, Krabi edged Isarn regional champs Roi Et United 1 – 0.

If that weren’t convincing enough, Krabi delivered three more goals and points to the distaste of Warriors fans with a 3 – 1 result at Lamphun on November 20.

Yesterday evening, with their away game against North Krungthep FC, they came from behind to secure the win with two late goals, running out 1 – 2 winners.

And so the stage looks set for a four-team southern derby in division one next season. In any case, keep checking the Phuket Gazette for the latest Southern Thailand football updates.