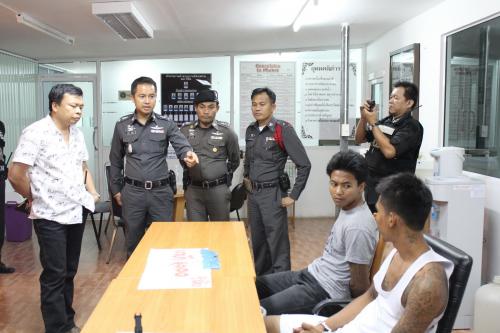 The two men, Apichart Karaket, 26, and Surasak Tunyaudon, 22, confessed to police that they were paid between 3,000 and 4,000 baht to transfer the drugs from a dealer’s house in Thalang to another dealer’s house, Wichit Police Superintendent Chawalit Phetsipear said.

At the checkpoint, police noticed that the pair seemed nervous as they were approaching, so officers waved them over to search them.

“We asked them to stop to be searched, but Mr Surasak jumped off the back of the motorbike. He threw a box away and then started to run,” Col Chawalit said.

At the same time, Mr Apichart made an attempt to flee the scene by motorbike.

However, neither perpetrator’s attempt to avoid arrest was successful.

“Police were able to arrest them, and then we found the orange box Mr Surasak had thrown away. Inside we found 1,000 ya bah pills wrapped up in foil,” Col Chawalit said.

Both men were charged for the possession of a Category 1 Drug with intent to sell.