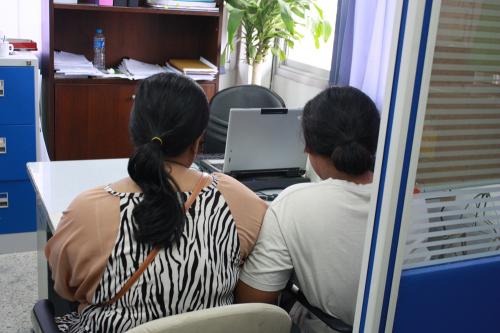 PHUKET: Police arrested a child rapist yesterday after the man’s wife came home early from work and discovered that he had been raping her daughter repeatedly over an eight year period.

The girl’s mother, Ms Kai (all family members were given aliases to protect the identity of the victim), reported her discovery first to her village headman, who then took her to the Thalang Police to file a complaint.

“Ms Kai said that on July 18 she came home early from work and noticed that the door and all the windows of her house were closed. She thought it was odd,” said Lt Thani Petchswee of the Thalang Police.

“She looked in one of the windows and saw her 13-year-old daughter, Meaw, running out of her husband’s room looking scared. Then Meaw went into the bathroom for several hours,” said Lt Thani.

“Ms Kai questioned her, and Meaw revealed that her stepfather, Mr Nit, had been raping her for years.

“Mr Nit raped Meaw when Mrs Kai was out of the house working. He told the girl that if she told anyone, he would kill her,” Lt Thani said.

Meaw was taken to Vachira Phuket Hospital for a rape test, and officers went immediately to a construction workers’ camp in Thalang to arrest Mr Nit.

When confronted by police, Mr Nit confessed to sexually assaulting his stepdaughter repeatedly over the last eight years.

Police have charged him for raping a child, Lt Thani reported.