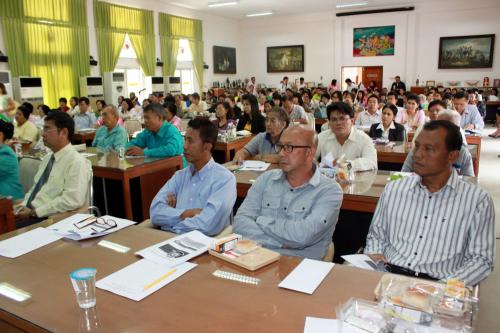 PHUKET: Participants from almost every segment of Phuket society gathered on July 17 to tell local government leaders what improvements they want to see on the island in the next two years. The ideas ranged from indoor football stadiums in every tambon to solving the island’s traffic problems.

Phuket government representatives along with members of state enterprises, private businesses and ordinary citizens gathered to brainstorm solutions to problems Phuket faces in preparation for setting the 2014-2016 Economic and Social Development Plan for Phuket.

“This meeting is important because the solutions come from everyone. We’re going to use these ideas to help tackle problems,” Phuket Provincial Administrative Organization (PPAO) President Paiboon Upatising said.

One of the problems highlighted was budget.

“Phuket’s registered population and true population does not match, and that affects the budget we are allocated compared to the financial support we need,” said PPAO Deputy Chief Administrator Watcharin Pathomwattanapong.

“Around 100,000 people from other provinces who are working here have not changed their addresses to Phuket, but the government allocates the budget based only on people who have addresses in Phuket,” Mr Paiboon said, echoing Mr Watcharin’s concern.

Participants had a longer list of topics they wanted local government to address including: teaching of foreign languages to prepare for the AEC; researching a special administration for Phuket; fixing the local tax system; improving basic public utilities; developing local schools in Thalang; and solving traffic problems.

“The meeting was a good step to take so we can collect ideas to be added in our development plan,” Mr Paiboon said.