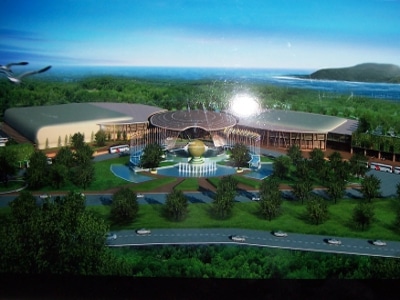 PHUKET: Government spokesman Prompong Nopparit was in Phuket over the weekend to assure that the Pheu Thai Party has no plan to cut central government funding for the international convention and exhibition center project planned for Phuket.

Mr Prompong made the announcement in Mai Khao on Saturday after meeting villagers at the project site on the island’s northern tip.

Mr Prompong dismissed as “rumor” media reports that the project’s 2.6 million baht in funding would be withheld.

Appearing with Phuket Governor Tri Augkaradacha after the meeting with local community leaders, Mr Prompong said, “It is not true that the government will cancel the budget”.

He went on to explain that the project’s Initial Environmental Examination (IEE) report was rejected by the Office of Natural Resources and Environmental Policy and Planning (ONEP) review board for four main reasons:

1. The site is a traditional nesting site for endangered sea turtles;

2. The site is home to natural forest land that should be preserved;

3. Concerns that the project will affect the way of life of local residents;

Despite these serious concerns, he said the Pheu Thai Party “would try and push the project forward so that it can bring benefits to the people of the Andaman region”.

“The budget is already approved, the construction design already finished. Though there is no Pheu Thai MP in Phuket, I will help make it a reality because this project would benefit not only the people of the Andaman region, but all of Thailand,” he said.

He suggested both government and private sector representatives meet the members of the IEE review panel and ask for an explanation of their findings.

“After discussions with Gov Tri and community leaders in Mai Khao and Tah Chat Chai this morning, I know that the villagers here agree with the project and have waited about 10 years for it to be built. The government sector, especially the Phuket Treasury Office, should join with private sector leaders and explain this to the panel. If they can get them to agree and subsequently approve both the IEE and Environmental Impact Assessment reports we will start construction soon,” he said.

Mrs Anchalee, a member or the opposition Democrat Party’s “shadow cabinet”, said the project had been studied for 15 years already and was long overdue.

Phuket needs a world-class convention center urgently as an integral part of the island’s development plan for MICE (Meetings, Incentives, Conferences and Exhibitions) tourism in the run-up to the establishment of the ASEAN Economic Community in 2015, which is expected to dramatically increase the number of regional tourists to Phuket, she said.

She rejected outright concerns reportedly stated in the IEE that the project would be in conflict with private-sector investments on the island, saying that no existing facility to accommodate gatherings of 3,000 to 5,000 delegates exist and that no investors were considering investment on such a scale.

“I think the Treasury Department needs to move fast to get them [ONEP] the correct information,” she said.

Noting that the same agency approved construction of a convention center in Chiang Mai, she said that if the IEE rejection is not overturned then a case should be lodged with the Administrative Court charging the agency with injustice to the people of the Andaman region.