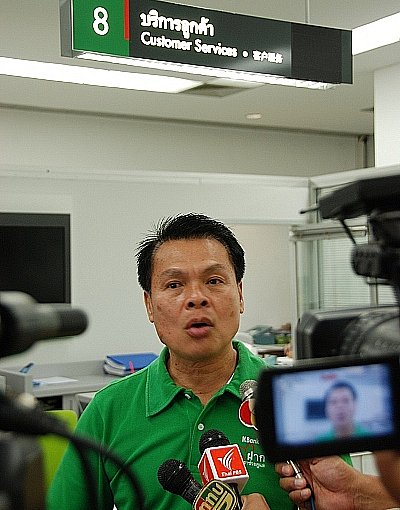 PHUKET: Police are hunting for a man who tried robbing a bank in Phuket Town late this afternoon reportedly with grenades strapped to his chest, but was foiled by the bank having been closed for business just five minutes earlier.

The man, described as dark-skinned and about 30-35 years old, arrived at the Kasikorn Bank branch on the corner of Chana Charoen Road and Tilok U-Thit 2 Road, opposite the Thavorn Grand Hotel, at about 3:35pm.

“The man tried opening the front door of the bank. Our staff were still working inside, but the front door was locked as we had already closed for the day,” said branch manager Auttakorn Thitirangsee.

The man, wearing jeans, a green tracksuit jacket and a baseball cap, walked around looking for another way to enter the bank, but failed, said Mr Auttakorn.

“We were lucky that the bank was closed and that the front door is made of safety glass,” he added.

Conceding defeat, the man threatened Urai Ruanwan, a local businesswoman in her mid-forties, showing her the grenades and stealing her motorbike, a red-and-black Honda Scoopy-i.

She had just arrived to withdraw money from the bank’s ATM, but had yet to make the withdrawal.

The robber did not demand that she hand over any cash.

At the scene, Phuket City Police Deputy Superintendent Jumroon Playduong told the Phuket Gazette that the man arrived at the bank on a motorbike taxi he hired in front of the nearby SP Kung Krata restaurant.

“When he arrived at the bank, he told the woman taxi driver, ‘Stop – I am going to rob the bank and I am not going to pay you’,” Lt Col Jumroon said.

“I think the man is mentally unstable. Normal people do not announce that they are going to rob a bank, and I don’t think he’ll get far as he is only on a motorbike,” he added.

Police have reviewed CCTV footage taken by the bank’s security cameras and have studied a footprint left behind by the man to use as evidence, said Lt Col Jumroon.

“The man was last seen riding towards towards the Seahorses Circle [the ‘Ma Nam roundabout’],” he added.

“We believe the robber used to work for the bank. We have searched for him at his house, but could not find him.

“We have also contacted his new place of work. They said he had not turned up at work for the past two days,” Lt Col Jumroon said.

“A witness said that two days ago he saw a man riding a motorbike past the bank many times, and that he saw a gun under a helmet in the motorbike’s front basket,” he added.