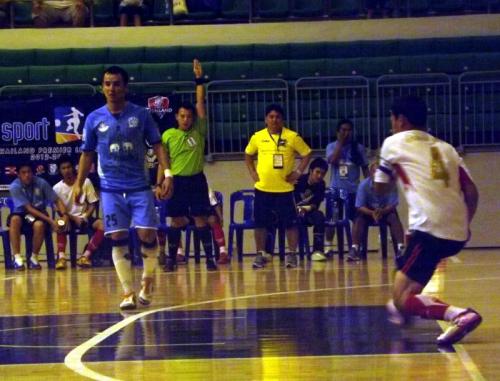 PHUKET: The island’s pro futsal team Phuket United won their sixth match in a row after defeating Bangkok FC (2-3) in an away match in the Thai capital yesterday evening.

The Andaman Pearl’s leading scorer, Jackson Santos, scored twice – in the 15th and 36th minutes, immediately putting him in 2nd place for the golden boot race with 33 goals this season.

Bangkok made a commendable comeback effort with Navin Rattana-wongsawat scoring back to back goals late in the game, but it was not enough.

That win followed three previous home victories against Nonthaburi, Surat Thani and Prachin, as well as another away win in Samut Songkhram, bringing the island’s pro futsal team’s winning streak to six in little over a two week period.

With 48 points from 16 wins and 13 losses, Phuket sit in 5th place of the 16-team Thailand Futsal Premier League.

The Andaman Pearl will conclude the season against last placed Highways Department on Friday, March 29 in Bangkok.

Other TFPL results from last night: