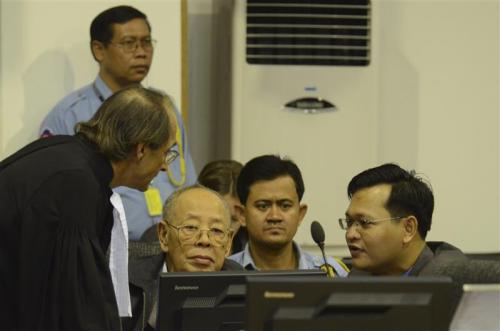 
Ieng Sary, minister for Cambodia’s Khmer Rouge, dies in hospital
Reuters / Phuket Gazette
PHUKET: Ieng Sary, who was standing trial for crimes against humanity during his time as the Khmer Rouge’s foreign minister in Cambodia in the 1970s, died this morning, the court said.

Ieng Sary’s death will dismay victims of the regime who fear those most responsible for their suffering will escape justice. An estimated 1.7 million people died during the ultra-maoist “killing fields” revolution of the Khmer Rouge and its leader, Pol Pot.

A United Nations-backed tribunal was set up in Cambodia to try those responsible, but so far only one relatively low-level prison chief has been found guilty and jailed. The court’s work has been hampered by funding problems and alleged interference by the Cambodian government.

Ieng Sary was one of three top Khmer Rouge leaders on trial in the court’s second case. The court announced his death at 87 in a statement, saying he had been in hospital since March 4.

“For the victims, this death narrows the scope of the trial and limits their search for truth and justice,” said Elisabeth Simonneau Fort, a lawyer who represents Khmer Rouge victims at the court. “We can say that by death, Ieng Sary escapes justice.”

The two remaining defendants are ex-propagandist Nuon Chea and ex-president Khieu Samphan. Many fear that only Khieu Samphan will live to hear his verdict as Nuon Chea has been in and out of hospital for years.

The case against a fourth defendant, Ieng Thirith, the wife of Ieng Sary, social affairs minister for the Khmer Rouge, was suspended last year when she was declared mentally unfit to stand trial.