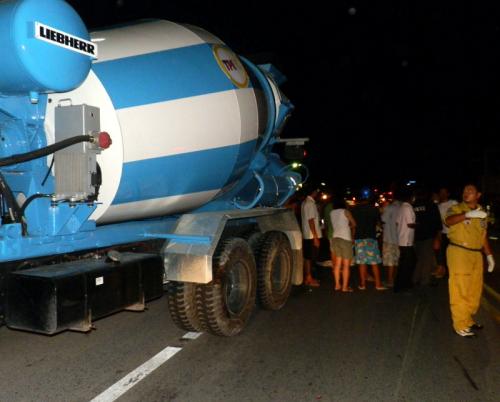 PHUKET: A concrete-mixing truck ran over a 5-year-old Burmese boy in Thalang on Friday night.

The boy, “Juggy”, was on a motorbike with his 35-year-old mother, Mrs Namprik, and his 3-year-old sister.

The concrete-mixing truck, allegedly being driven at a high speed toward a construction site in Patong, struck the motorbike at around 9:45pm on the Baan Don-Cherngtalay Road, Roonnaphum Permphoon of the Thalang Police told the Phuket Gazette this morning.

“The bike fell down and Juggy, who was ridding on the back was thrown from the bike onto the road, where the truck ran him over,” Sub Lt Roonnaphum said.

“Mrs Namprik, who was the only one wearing a helmet, and her daughter received some scratches and bruising,” he added.

There was no alcohol found in his system, Sub Lt Roonnaphum added.

Phuket Sports: England in for hard time with Italian visit