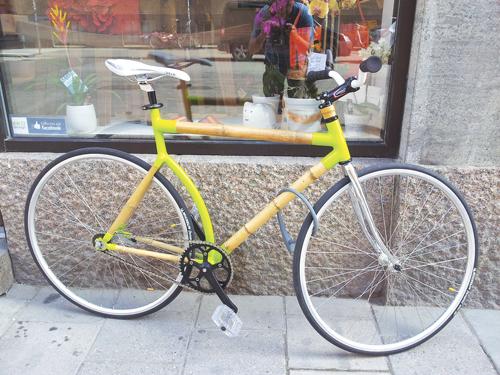 PHUKET: A reader recently asked Normita Thongtham, who writes a Sunday gardening column for a national daily, if her earlier suggestion about making a living fence of bamboo “planted six to eight meters apart was a typographical error.”

The writer’s answer was “no.” And the reason? Because bamboo (bambusa) grows very fast, and the space between the individual plants is rapidly colonized by offshoots. Of course you can put the plants closer together, but remember that bamboo not only forms a dense mass of roots, but that it is, in any case, usually sold as a bagged clump, which already contains interwoven rhizomes.

Odd, when you think of what bamboo is like above ground: a gigantic tropical grass with smooth, cylindrical, ramrod straight canes that can grow, according to the variety, from fifteen to eighty feet tall; and possessed of luminous foliage so elegant it has for centuries been obsessively painted by oriental master artists.

That, in a nutshell, is both bamboo’s glory and its imperfection as a garden specimen. It makes a vivid and distinctively tropical screen, but it will not let much else grow beneath it, so rapacious is its capacity to spread its roots.

There are a couple of further points for the gardener to consider. Bamboo does drop its leaves frequently: this habit means that the unsightly dead shards that collect around the plants will need to be swept up at regular intervals.

Moreover, bamboo loves plenty of water. Around the streets of Phuket, I see screens of mature bamboo, which are bleaching and dying back in the current dry season. But those cavils should not amount to a rejection slip. It is just that bamboo is not suitable for every garden, especially small-scale ones.

Nonetheless, the range of available species is considerable.

Vulgaris, as its name implies, is the commonest form. It is also the giant of the family with dark green canes up to twenty five meters tall and nine inches thick.

More often grown commercially, or taken indiscriminately from the wild, it is a feature of the Thai urban-scape both as a structural material for scaffolding, and as a component in almost everything from chairs or permanent screens to summer houses. A more decorative cultivar, “aureo variegata“, has canes striped with yellow and green. The tips of its huge shoots, sliced thin, are used in curries and soups.

Better suited to your garden is ventricosa, also known as “Buddha’s belly”. The apt name comes from the prominent swelling that develops between each joint or leaf node. These intervals are quite short, thereby giving the stem a knobbly, even bead-like appearance. A native of China, it is unlikely to grow more than a few meters tall in Phuket. Distinctive but maybe not to everyone’s taste, its somewhat grotesque appearance looks impressive when grown as a clump in a prominent location.

Most garden varieties derive from bambusa multiplex, which has masses of crowded stems, no more than 3 meters across at the base. The leaves are smaller than those of entricosa. Garden centers may stock “Alphonse Carr”, which has green and gold stems forming a broad-headed clump of foliage.

“Fernleaf ” is perhaps the most distinctive, with slender, arching stems and dainty, fern-like foliage. Moreover, it does not exceed ten feet in height. Sulphurea has golden canes, which nicely complement the bright green foliage.

Propagation of all bamboos is normally done by offsets, consisting of one fully grown and hardened stem, excised where its rhizome segment branches from an older rhizome. Put the offset in soil, flood with water, and apply fertilizer as soon as new growth shows.

Tip of the week: Sterilized soil
I was recently asked if I knew where to obtain sterilized soil in Phuket. I know of no such source, though the compost sold in white fabric bags may be already heat-treated. Sterilization is a precautionary process: it destroys harmful fungi, bacteria, viruses or nematodes. Plants have their own defense against such micro-organisms, but seeds and cuttings are especially vulnerable.

The simplest way to sterilize soil is to heat friable and moistened earth in a non-metallic container in a microwave for a couple of minutes. Another more laborious method, is to bake soil in a conventional oven at 200 degrees centigrade for at least two hours. Commercial growers deploy pressurized steam systems, but in a hot climate such as Phuket’s, you can use double layers of plastic sheeting, which are laid over prepared and moistened ground, held down with stones and left for eight weeks.