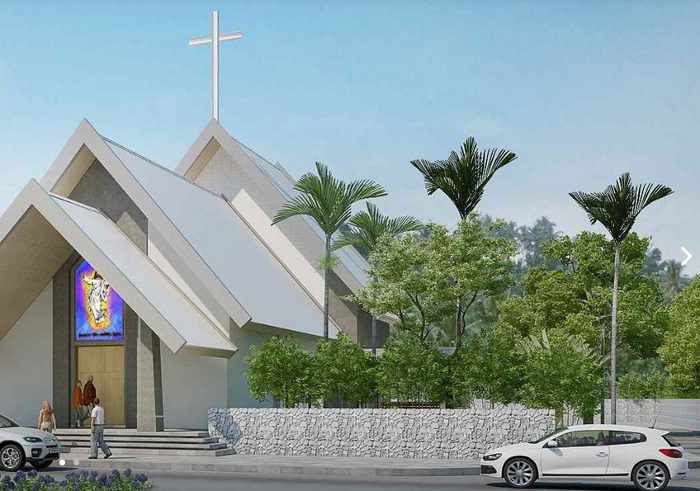 PHUKET: Less than a year after construction work began, the new Catholic church in Cherng Talay will be consecrated on July 6.

“At times we thought we needed a miracle but we are there now. We began construction in September last year and in a few short weeks St Joseph’s Church Cherng Talay will be consecrated and open for all,” said Cherng Talay resident Michael Hosking, one of the driving forces behind the initiative.

The idea came to life at Christmas lunch in Phuket in 2010 when Bishop Joseph Prathan Sridarunsil was asked by Catholics in the Laguna area to grant them official parish status. Catholics in this part of the island had been attending Sunday mass at the various Laguna hotels for the previous fifteen years, under the guidance of Father Richard Woodarek, but it was becoming clear that they needed a permanent home to call their own.

Bishop Joseph, who is in charge of the Surat Thani diocese that covers Phuket, agreed with them and they received official parish status a year later, just before their beloved Father Richard passed away, having served Phuket’s Catholics for 54 years.

Shortly after becoming a parish, the diocese bought land on Pasak Soi 8 in Cherng Talay as a site for the new church, but it was up to the congregation to raise the money to build and fit out the building.

“Many of the congregation are Asian Catholics and quite a few are veteran Asian expats from Hong Kong, Singapore and China. Quite a few, myself included, had many contacts in the region from the corporate and business world and each of us have tapped into that network to raise the considerable funds necessary,” said Hosking.

“Some of the congregation had skills that were needed and those who could not contribute financially have done so with time, expertise, effort, enthusiasm and support,” he added.

Contributions have come from all types of donors, including some weighty donations from Catholics who were visiting the island on holiday and attending mass at Laguna hotels. In addition, many of the parishioners have held fund raising events and contributed during extra collections at the regular Sunday masses.

The consecration of a new church will be held by Bishop Sridarunsil, assisted by Parish priest Jim Pura and other dignitaries. The congregation is blessed with a large Filipino membership and thus have an excellent choir backed by great musicians, and they will be there in full effect with some special guests too. All are welcome to attend this once in a lifetime mass, non-Catholics too.

The consecration will take place on July 6. For more details, go to the parish’s website: phuketcatholics.com. The St Joseph’s Church is located on Pasak Soi 8 just off the Bandon-Cherng Talay Rd.