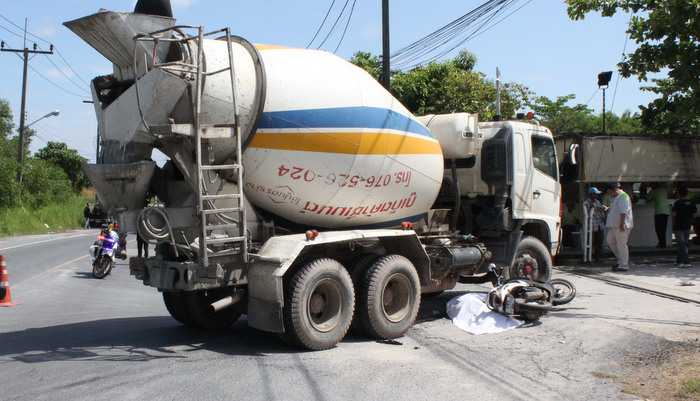 PHUKET: The driver of the cement-mixer truck that crushed and instantly killed an 18-year-old student in Rassada last week has surrendered to police and been charged with reckless driving causing death.

Chalermchai Lakbaan, a student at Phuket Rajabhat University, died instantly when his motorbike collided with a cement truck entering* the Phuket Cement Co Ltd site on Prachasamakkee Road in Rassada on November 13.

Mr Chalermchai fell from his motorbike while attempting to overtake the truck and was crushed under the wheels of the juggernaut (story here).

“The truck driver surrendered himself to police last week. We charged him with reckless driving causing death,” Capt Udom Petcharat of the Phuket City Police told the Phuket Gazette.

Capt Udom declined to identify the driver by name, but confirmed he was released after posting an undisclosed amount as bail.

*The report originally stated that the truck was exiting the Phuket Cement Co Ltd site.