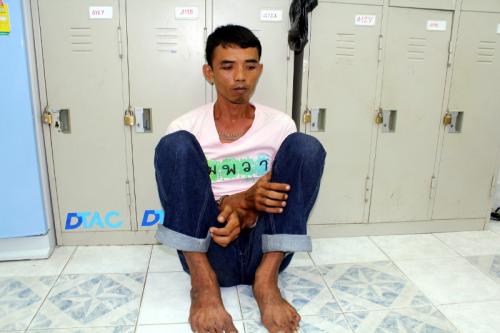 PHUKET: The ex-con responsible for a string of robberies at Rock Garden Estate was arrested by police yesterday, after several days of high-living in Hat Yai with the proceeds from the fenced goods.

Mr Weerapat had been released from Phuket Prison on May 11 after serving two years for a robbery conviction.

“After he was released from prison, he couldn’t find work, so he decided to become a thief again,” Lt Col Prawit said. “He confessed to choosing the houses in Rock Garden Estates because there was no security guard at the estate.”

“On June 14, Mr Weerapat broke into a house and was starting to collect things when he noticed a policeman’s uniform. He got scared and left immediately, taking only 100 baht.

“Right after that he broke into another house, which belonged to a teacher. Neighbors saw him and tried to stop him, but he escaped by jumping out a window and running up a nearby hill. The neighbors followed him, but it started raining heavily, so they were forced to go back home,” Lt Col Prawit said.

Mr Weerapat’s motorbike remained behind at the crime scene. His image had also been captured on the CCTV cameras at the estate.

About three and a half hours later, he came down the hill, bought a change of clothes at a nearby market, and went home to pick up the stolen goods he was keeping at his house in Saphan Hin. He then took a bus to Hat Yai, where he sold the goods for several hundred thousand baht, police said.

He stayed in Hat Yai after that, spending the money on nightlife until he was almost out of money. Then he came back to Phuket and checked into a hotel, police said.

On June 20, an informant told police that Mr Weerapat was at a hotel near Wichit Sangkaram Temple on Narison Road. Police quickly arrested him and charged him with robbery.

“Officers searched the suspect’s house in Saphan Hin, but found only two laptops, which they seized as evidence for the investigation” Lt Col Prawit said.

Case of mistaken identity causes drug dealer to give up drugs, submachine gun