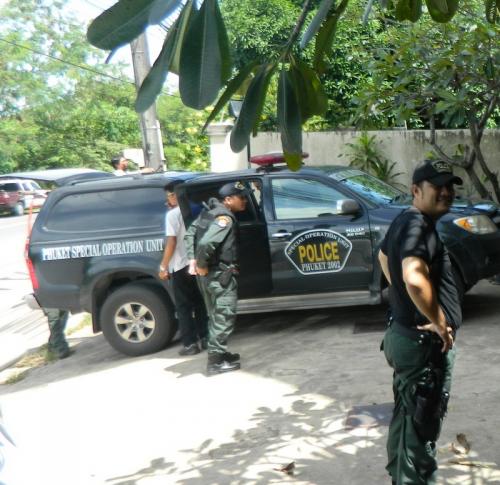 PHUKET: A fender bender in Phuket Town sent a drug dealer fleeing the scene, leaving a large stash of drugs and a submachine gun behind.

After the small collision in front of the downtown market on Ranong Road [map here], both drivers stepped out of their vehicles to negotiate. One of the drivers was still in his municipality uniform.

“The drug dealer mistook the long brown pants, white shirt and black suit jacket of the municipality worker’s uniform for that of a police officer and took off running with a handgun,” said Phoom Semmaworanon of the Phuket City Police.

Phuket City Police arrived at the scene and searched the man’s car. In the trunk they found a submachine gun (Uzi); shotgun shells; other ammunition; 50 grams of ya ice (crystal methamphetamine); 4,580 ya ba (methamphetamine) pills and a laptop, Lt Phoom said.

Also inside the car, police found a key to a room in a small hotel on Songkhla Road.

Police accessed the room with the key, but there was no one inside.

“Police took evidence found in the room back to the Phuket Provincial Police station. We now have the name of the suspect, but we cannot reveal it to the media at this time,” Lt Phoom said.