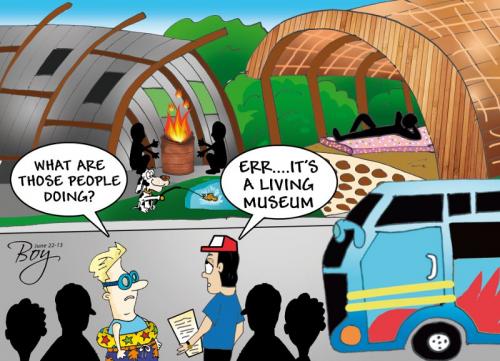 PHUKET: Failure of local authorities to complete the multi-million baht “Sea Gypsy Cultural Center” on Koh Sireh in Rassada is just the latest in a long string of long-delayed projects on the island that highlights the inefficient use of taxpayer money and failings of bureaucracy – all at the teetering altar of “tourism promotion”.

Millions of baht in funding for the project was justified on lofty objectives that few could dispute: to create a center where visitors could come to understand and appreciate what is known about the history and way of life of one sea gypsy tribe, the Urak Lawoi, who has a seaside village at Laem Tukkae on Koh Sireh.

Inevitably, and as usual, the project was touted as a way to attract tourists to the area.

Beautiful and largely unknown, even to many long-time Phuket expats, Koh Sireh is perhaps the least promoted part of the province in terms of tourism. This is the result of an unfortunate geographic reality – the island is separated from the mainland by Klong Tah Jeen and what remains of the once extensive mangrove forests along its banks. In our “rich man, poor man” reality, encroachment generally tends to create either luxurious resorts and mansions or slums. In this case, unfortunately, it is the latter.

Access to Koh Sireh is by the bridge along Sri Suthat Road, which extends from the gritty and economically depressed east side of Phuket Town, home to derelict buildings, slum housing communities and the largest public housing estate on the island.

In its current state, this “island within an island” seems to lack anything resembling a coherent tourism promotion theme: it has beaches, but they are not as nice as their west coast counterparts; it has a nice temple, but not nice enough to attract many tourists; it has a macaque colony “viewpoint”, but not nearly as nice as the one on Toh Seh Hill. It is also home to a number of disparate organizations: an orphanage for HIV-positive kids and an “international” dog training school, among others.

In short, despite being well worth a visit, most explorers will do a u-turn before they cross far enough over the bridge to realize that the island actually has something to offer.

It is only after passing through this area of urban decay and the fishing port area that Koh Sireh’s real charms can begin to be appreciated. Some private investors, most notably the owners of the Westin Koh Siray Bay Resort, are spearheading real efforts to develop the area.

It seems to be an uphill battle, however. Sadly, the current state of the museum-cum-homeless shelter serves not as a tourist attraction, but rather as a reminder of how indigenous people continue to suffer at the hands of successive governments that pay lip service to their needs while denying them the most basic of rights, such as land title deeds for plots of lands they and their ancestors have occupied for decades.

Phuket Opinion: Why not to cook