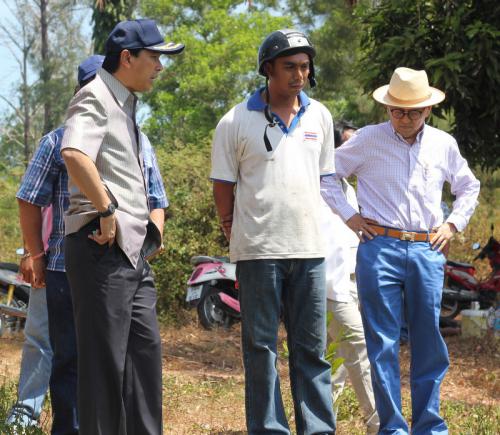 PHUKET: For the second time in a year, Samkong residents have filed a formal complaint over a sickening stench emanating from the Bang Yai Canal.

In April last year, the source was allegedly raw sewage dumped into the canal further upstream, in Rassada. This time, residents blamed an upstream noodle factory.

During an inspection on Tuesday, Phuket Governor Maitri Inthusut ordered managers of the noodle factory to immediately build a pond to keep wastewater from being released into the canal and to install a separate electric meter to monitor how much energy was used to treat the wastewater.

“The committee will check on the factory and the area regularly, without telling the factory in advance,” he said.

When the malodorous canal was in the spotlight 10 months ago, residents also pointed their fingers at factories in Rassada. However, Phuket City Wastewater Chief Chakkrit Songsaeng said that the culprit was more likely the hundreds of new homes that had sprung up along Soi Paniang in recent years, many without septic tanks installed (story here).

His opinion was backed up by tests on factory wastewater release points that showed the water to be within regulatory standards.

“The dirty water affecting Samkong residents is from raw sewage from the Soi Paniang area being emptied into the canal… it is not from the private factories in the area,” Jarun Nongsook, an engineer at the Phuket Provincial Industrial office, said last year.

The governor proposed a multi-pronged solution to the polluted canal last year that included dredging drainage ditches and lining them with cement; oxygenating the water; putting Effective Microorganism balls into the ditches; enlarging sewer pipes in Rassada; and encouraging restaurants, companies and residents in the area to install their own wastewater treatment tanks to help reduce the average biological oxygen demand in the water.